Raucous Ride with Pride and Prejudice at the Rep

The Bennets at the Bingley Ball. Photo Credit Alan Alabastro

Not one to mess too much with universal truths, I can confirm that it’s true; everyone loves a great comedy. Seattle Repertory Theatre presented the west coast premiere of Kate Hamill’s adaption of Pride and Prejudice last night. The play is directed by Amanda Dehnert, an experienced director who recently directed Westside Story, at Carnegie Hall. Kate Hamill shows her versatility and energy with this reimagined, sharp and humorous take on Pride and Prejudice. As Lizzy Bennet astutely states, “playing games keeps one sane.” Once the actors set foot on stage, there is no stopping the humor and fun.

The play’s comedy manifesto is evident early on. While Austen’s novel contains moments of humor amid the painful truths of life, Kate Hamill’s play magnifies the mirth. Hamill begins the play with the berserk behavior of the Bennets on show. Mrs. Bennet played with a high strung but at times sly style by Cheyenne Casebier, is seen running wild and ringing a loud bell while announcing the fortuitous fact that a single man with a fortune has rented the house nearby. At the same time, Mr. Bennet played calmly with a subversive, witty humor by Rajeev Varma, is sitting placidly among his wife’s storm while reading an edition of The Stranger. (The Stranger’s cover has a comic book illustration of Trump with his head ablaze). 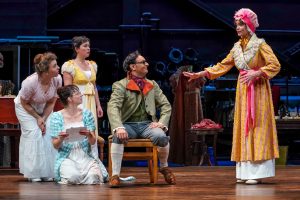 Jumping into the wild fray are the Bennet’s daughters. Lizzy, Jane, Mary and Lydia are all showoffs (don’t expect Kitty as she’s not included). Mary played with an engaging deadpan humor by Trick Danneker, is the plain sister. Mary is known for her annoying consumptive cough, her pseudo intellectual announcements and her unnerving habit of creeping up and frightening her mother and sisters. Jane played by Emily Chisolm, characterizes her with warmth but a lot less dignity than Austen’s version. Jane is the sister who tries to get married for the sake of the family but doesn’t have the necessary guile to hook her beloved. The bawdy undercurrent of the play is evident in Lizzy’s emphatic plea to her sister. Lizzy played with aplomb by Kjerstine Anderson, tells her sister Jane that her ability to nab a man is vital. Jane must fall on the sword for us all so we won’t become old maids. 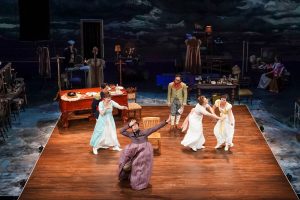 Lizzy is the glue that holds the play together. Lizzy uses her intelligence to strategize and problem solve almost everyone she comes in contract with. She counsels her sisters, tries to manage her hyperactive mother while simultaneously trying to muddle her way through her own romances. Lizzy’s smarts come through but so do her faults. When Lizzy boldly accuses Darcy of hating everyone, Darcy counters with the accusation to Lizzy that she willfully misunderstands everyone. By play’s end Lizzy realizes that even though she was quick to condemn Darcy as arrogant and prideful, Lizzy admits that she too can be conceited as well as prejudiced. 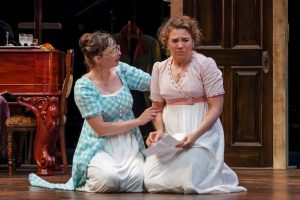 Darcy played nobly by Kenajuan Bentley seemed to be the most straight-laced character. Unlike the other characters who are humous from the start, Darcy is stern and composed much like Austen’s version. However, as the play progresses, Darcy tries his hand at humor too. He entertains with his goofy dance moves. Goofy dance moves are a trademark of this play; all the characters have one. What makes the dancing even funnier is that the moves are modern; definitely not Regency. And neither is the music. Pop music and dance grooves are at home in this version of Pride and Prejudice. 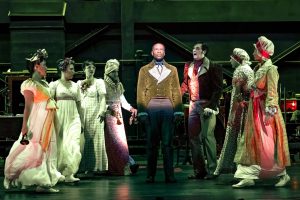 Another level of humor in this play occurs because many actors play multiple roles. Hana Lass plays Lydia and Lady Catherine. Hana Lass plays both women successfully with a quirky forcefulness that’s hard to forget. It’s funny to see the one actor play Lydia who is young, headstrong and foolish while playing Lady Catherine who is controlling and supercilious.

The most impressive act of the night comes from Brandon O’Neil. He plays Wickham, Miss Bingley and Mr. Collins. Brandon has the skill to differentiate these characters and bring these characters to life in a vibrant and entertaining manner. He plays Miss Bingley as the imperfect snob who lets her guard slip when she lusts openly for Mr. Darcy. Brandon plays Wickham as the cad who likes to trap women into romance through his false sob stories. One fault I have with the play is that there wasn’t enough stage time given to Wickham. Its Wickham’s deviancy that shows up Lizzy’s faults and its Wickham who gives Darcy a chance to redeem his character. Lastly Brandon plays Mr. Collins. Unlike Austen’s version, this play shows Collins as an idiot but a very lusty idiot. His lascivious behavior emphasized by the suggestive positioning of bouquets of flowers in front of his trousers is pure slapstick. Kate Hamill has taken characters that we love and reimagined them for a successfully funny effect. She’s opened new ways of seeing those characters.

I’d like to complement the stage and costume designers. The clothes are refreshing. Even though most of the clothes give a generous nod to Regency dress, the converse shoes peeking out from under Lizzy’s gown made me laugh. 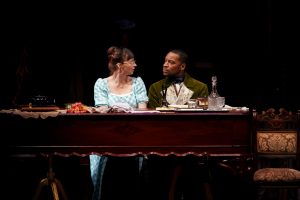 Lizzy and Mr. Darcy warming up to one another. Photo credit Alan Alabastro.

The play’s attitude is as open as the cutainless stage. The open stage, which by the way resembles an antique jumble sale, allows the audience to witness the costume changes and even the actors who aren’t playing in the current scene. It’s no distraction to see the guts of the stage. The acting is vibrant, witty and engaging enough to sustain much of our attention. On top of that, those actors in the wings became part of the audience and their collusion with the audience makes for a comforting realization. We’re all in this play, we’re all in this life together so let’s all enjoy things while we can.

Pride and Prejudice, based on the novel by Jane Austen and adapted by Kate Hamill. Showing at Seattle Repertory Theatre’s Bagley Wright Theatre, 155 Mercer St. Seattle, WA 98109. Located at the Seattle Center at the corner of Second Ave. and Mercer St. Tuesdays to Sundays @ 7:30pm and weekend matinees @ 2:00pm, till Oct 29th. Tickets https://www.seattlerep.org/Buy/Tickets/Production/6379 or call the Seattle Repertory Theatre Box Office at 206.443.2222 or toll-free at 877.900.9285. Info at seattlerep.org.