When officials learn that an incognito government inspector has arrived in their town, they scramble to cover up evidence of their corruption. A broke, free-loading traveler mistaken for the inspector takes full advantage of their greed and panic with hilarious results. Seattle Shakespeare Company’s production of The Government Inspector a laugh-out-loud funny comedy of errors. 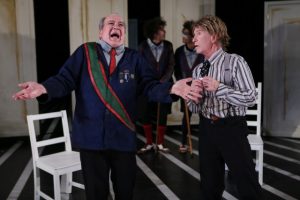 Nikolai Gogol’s The Government Inspector debuted in 1836. It satirizes the self-serving, cowardly aspects of human nature as well as the political corruption in Imperial Russia at that time. The 2008 Jeffrey Hatcher adaption performed by Seattle Shakes uses more contemporary language to highlight the jokes, comic characters, and over-the-top situations that can still make audiences laugh today.

The strong ensemble cast, led by Rob Burgess as the Mayor and R. Hamilton Wright as Khlestakov, doesn’t squander a single joke out of the script. Every one of the twelve actors made the audience laugh out loud on opening night. Veteran theater director Allison Narver and the actors have found the exact right tone to milk the farcical situations and characters without being so cartoony the play loses its satirical edge. Pete Rush’s costumes and Julia Welch’s set anchor us in this not-quite-real world, and are aesthetically pleasing in themselves.

Seattle Shakespear Company’s The Government Inspector is well-produced and hilarious, a cleverly written and performed tale of scheming, stupid people. It’s a whole lot of fun, and definitely worth seeing.