Ayad Akhtar’s “The Who and the What” at ArtsWest

“Can’t you see that I’m conflicted? Isn’t that what good art is supposed to do?”

At ArtsWest Playhouse and Gallery, ArtsWest and Pratidhwani present The Who and the What, Pulitzer Prize-winner Ayad Akhtar’s play about a Muslim Pakistani-American writer whose controversial manuscript forces she and her family to confront issues of faith and identity. This well-written and well-produced play is funny, touching, and sure to prompt discussion about some contentious subjects.

The Who and the What kicks off ArtsWest’s 2017-2018 season, which is called “I Am,” and features plays that focus on struggles for identity. Ayad Akhtar’s follow-up to his 2013 Pulitzer Prize for Drama-winning Disgraced has no shortage of this type of conflict. The Who and the What is the story of Zarina, a writer struggling to complete her first novel, the daughter of immigrants from Pakistan, and a practicing Muslim. Zarina is finally inspired to finish her novel when she finds love with Eli, a white Muslim convert, ending months of writer’s block. However, the book’s depiction of the Prophet Mohammed and controversial take on women and gender politics in Islam causes conflict with Zarina’s family, especially her more conservative father and sister. They confront issues of religion, identity, and gender relations, as well as the conflicts within their own family. 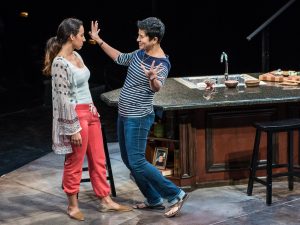 As anyone familiar with Akhtar’s other work would expect, The Who and the What is funnier, smarter, and more insightful than most Big Issue plays. As well as an in-depth and, at times, tense exploration of the role of women in Islam, this is a touching portrait of a family that feels true to life. The debates between loved ones and family members don’t just feel like talking point vs. talking point; they feel like when a group of people who love each other find themselves at odds about issues deeply important to them. This human portrayal of American Muslims, immigrant and otherwise, is welcome and important at this time of heightened Islamophobic rhetoric from many politicians and media figures. The Who and the What not only depicts those who practice the Islamic faith as actual nuanced human beings, but highlights the diversity of viewpoints within one of the world’s largest religions, from Zarina’s ultra-conservative extended family from Pakistan’s frontier province to she and Eli’s much more liberal views.

Director Samip Raval capably leads the cast and crew through the tone shifts that if handled poorly could break the play, but, in this case, make it. Solid work from the rest of the production team supports the script and performances. Brian Murphy’s sound design, especially the smart use of transitional music, is the show’s technical highlight.

Monika Jolly gives the standout performance of the show as Zarina, a role she also played in The Who and the What’s original run in 2014 at La Jolla Playhouse. She plays the character with an understated depth that keeps the audience invested in her journey, though they may not always agree with her views or decisions. Haley Alaji (younger sister Mahwish) and Andre Nelson (Eli) both give engaging performances occasionally undermined by feeling too broad for the script. Abhijeet Rane displays a lot of natural charisma in his performance as conservative father Afzal (despite some noticeable line flubs at the performance I attended), and delivers many of the plays funniest lines, as well as those most likely to offend.

With an exceptional script, a talented cast and crew, and an in-depth and intelligent take on controversial and important issues, ArtsWest’s The Who and the What is a show you won’t want to miss.