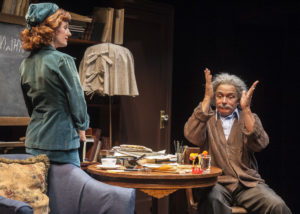 Taproot Theatre lays out a tough question with its local premiere of Relativity.   Can a great man also be a good man? Do history’s heroes fail at being good human beings? Playwright Mark St. Germain attacks the conundrum with gusto in his three person period drama. Early in the play, characters reference the biographies of Charles Dickens and Sigmund Freud, noting how their domestic success as husbands and fathers falls far short of their meteoric career achievements.   Does Einstein also belong in this category of severely flawed men? While the play does not provide a definitive answer, it does offer ample food for thought for its audiences.

St. Germain knows his way around a script; he also penned Freud’s Last Session and The Fabulous Lipitones, both previously produced by Taproot. Here, he expertly lays out the exposition. Einstein (Dennis Bateman) is visited by a reporter (Candace Vance) who is determined to learn more about the mysterious disappearance of the scientist’s daughter Lieserl.  Born in 1902, Leiserl was his first child. Her mother was Mileva, a woman that became the scientist’s wife one year after the child’s birth. Elements of the story are true, but St. Germain provides a great deal of conjecture exploring the possibilities and meaning behind the verifiable events. Einstein indeed had his first daughter out of wedlock and as far as we know he never saw her alive. She was said to have been born with Scarlet Fever. The possible effects of the great scientist’s mysterious family event make for a lot of entertaining speculations.

Spending time with Einstein proves to be a lot of fun. Witty, cantankerous and insightful, the great scientist is never at a loss for words. He tells the reporter that it is far easier to love mankind than man. Bateman does a skillful job of bringing this eccentric genius to life; it doesn’t take long for the audience to imagine that Einstein is really spending his afternoon with them. Vance’s reporter is laser focused throughout. It is her character that is involved with an Act I twist that I won’t spoil here, but it is a shocker. Taproot regular Pam Nolte does a fine job portraying Miss Dukas, Einstein’s live-in maid. She too will have some secrets to reveal before the final curtain.

While some of the dramatic machinations between the two main characters might be a bit forced, the central idea concerning the ethical responsibilities of great men successfully unfolds throughout the plot. Einstein admits that he may be a monster but demands to know if we are all willing to “wait two thousand years for nuns to invent the wheel.” Perhaps the greatest minds must fall short of expected societal norms. He urges the reporter to escape from the conventional while she steadfastly contends that a moral order matters.

Did the great Einstein completely fail his family? The show’s final scenes provide lots of tantalizing clues but finally leave the question up to its viewers.   One closing thought rings clear through lines spoken by Einstein at a train station on a bitter cold New Jersey night and might in the end be the over-arching theme of the work: Being good is something you have to work at everyday. Is all that work worth it?

Relativity has its National New Play Network Rolling World Premiere at the Taproot Theater. It is directed by the troop’s producing artistic director Scott Nolte. Mark Lund designed the terrific set depicting Einstein’s study and sometimes his inner thoughts as well. The show runs through October 28 in an extended run. Wed/Thursday 7:30 p.m.; Fri/Sat 8:00 p.m. and Saturday matinees at 2:00 p.m. For more ticket information go to or call 206-297-6882. The Taproot Theatre is located in the heart of Greenwood at 204 N 85th Street, Seattle.

We Will Not Be Silent–Speaking Truths in Dangerous Times
March 26, 2019
© 2022 Drama in the Hood. All rights reserved.
Site Design