The Complete Works of William Shakespeare (Abridged) expertly parodies the Bard’s work with puppets, rap, Freudian analysis, and more. In this encore production at the Slate Theatre, the Fern Shakespeare Company caricatures some classics with mixed results. 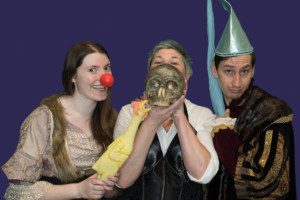 The Complete Works was first performed by its writers, Adam Long, Daniel Singer, and Jess Winfield, of the Reduced Shakespeare Company, at the Edinburgh Festival Fringe in 1987. Since then, this three-actor play has been performed by theater troupes all over the world. The show presents all 37 of Shakespeare’s plays in abridged, parodied, and/or combined form. With room for improvisation, audience participation, and other deviations from the script, it’s easy to see the appeal for both actors and audiences. 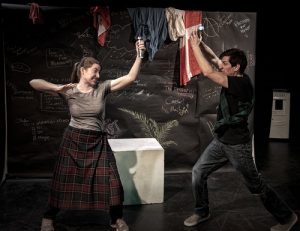 One doesn’t have to be an expert in Elizabethan drama to enjoy the play, but a basic knowledge of Shakespeare’s more popular works and writing conventions is required to understand it. Real Shakespeare nerds will appreciate the more obscure and detailed references. However, I found a lot of the references and jokes more accurate than funny. The Othello rap and football-style summary of the history plays had the feel of very creative class presentations rather than bits from a comedy show. Still, there were some moments that made me laugh out loud, and about half the audience found the show much funnier than I did.

The version of The Complete Works of William Shakespeare (Abridged), first performed by the Fern Shakespeare Company back in February with sold-out shows, is directed and adapted by two of its company members, Doug Graham and 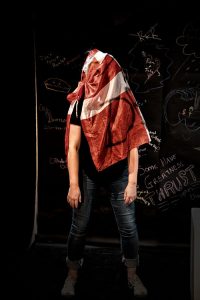 Jessica Fern Hunt, and performed by Annie St. John, Jean Sleight, and Roger Estrada. Estrada, playing a boneheaded actor who has revelations about the nature of acting throughout the show, gets the majority of the funnier lines, and makes the best impression. Jokes often fall flat, but the crowd participation sections are fun, and the actors seem to have genuine enthusiasm for the material.

Of all the Shakespeare parodies that pop up around town throughout the year, The Complete Works of William Shakespeare (Abridged) is likely to be the most comprehensive. If you want to appease your inner Shakespeare nerd and support a small, local theatre company while you’re at it, this Fern Shakespeare Company production might be the choice for you.

MacBeth-The Definitive Production
May 9, 2017
© 2023 Drama in the Hood. All rights reserved.
Site Design