My Heart is a Drum: World Premier in Issaquah 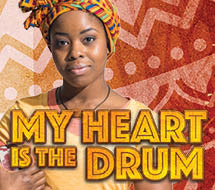 As a critic I occasionally face a dilemma: how do I treat a show that is beautiful, well-done, even sumptuous … but which left me cold until the last ten minutes or so? (That is to say, that I would have walked out on if seeing the whole thing wasn’t part of the job.)
The best answer I can manage is: swallow my preconceptions and just talk about what was good. And in Village Theatre’s mounting of the new (world premier) musical, My Heart is the Drum, there is a lot that is good.
Good: the whole darn production. It’s gorgeous in its simplicity, from beginning to end. The stage setting is either (1) an enormous tree, depicting a tiny village in Ghana, with only a few accouterments added here and there as needed; or (2) the bare necessities needed to depict life in the nearby city of Accra: merchant carts when outside, a desk and/or beds when inside. Stunningly simple, yet both visually and emotionally effective (particularly with creative lighting occasionally added).
Good: the whole darn cast. There wasn’t a weak performance on that stage, from the first voice we hear — Nana, acted by Shaunyce Omar — to bad guy Caesar (Geoffery Simmons) to our heroine, Efua (Claudine Mboligikpelani Nako). And everyone in between. Solid acting and solid, often mesmerizing, singing.
Good: the music. Remember, folks, this is a brand new musical, being presented for the first time ever … yet the music seemed as comfortable as an old shoe, the tunes and lyrics lovingly fit to each character and each situation. I was particularly struck by the very early-on duet, “Seeds, Dirt, and Cotton”: such a seemingly simple thing, how to hand-process cotton that has been reaped, manages to touch on interpersonal relationships, family traditions, farming traditions, and a host of other topics unlikely to be included in what is, at its heart, a love song. (Another love song, well into act two, is equally touching in a perversely different way, as Efua forlornly recalls the “Six Buttons” on the shirt she wore on her first day of school.)
Good: the costuming. To my eye it was simple and unobtrusive (that is, appropriate to each situation); but it was one thing my companion raved about as we drove away afterward, how the costumes had been slyly conceived and constructed, from the simple farming garments worn by Efua and her fellow villagers, to a dress late in the show that she swore that she recognized from a popular catalog but which was perfectly cast in its role. I admit to a laissez-faire attitude as regards costuming in general; but in hindsight, the sartorial factor in this production did, indeed, deserve kudos for its part in selling the story.
So. With all those “goods,” why do I face such a dilemma in this review?
The story.
From the director’s notes: “My Heart is a Drum takes place in West Africa, but in reality, it takes place in every town in America. The universal truths of hardship and the ability to send your kids to college. The want of a child to … know more than their parents. …”
Ah … yeah, not exactly uplifting. Director Schele Williams is right that these truths are all around us; I know people who live them every day. Why do I want to go see them on a musical theatre stage? Except that My Heart is a Drum also “tackles global women’s issues that Hillary Clinton calls ‘the unfinished business of the 21st century’ ” — those issues being sexual slavery, paternalism, and human trafficking, to name just a few. To wit:
“In the small village of Kafrona in Ghana, one spirited young woman is determined to attend university, against all odds. So when her education is denied, she defies her parents and risks everything to set off for the big city. But what awaits her there is more dangerous than she dared imagine, and she finds that more than just her dreams are at stake.” Yeah: she’s enslaved by bad guy Caesar and forced into prostitution, in a world when and where AIDS was misunderstood and ignored. Yow!
Yet, when all is said and done, it is this additional (and equally depressing) part of the story that, in the end, proves to be Drum’s salvation. In the end — that last ten minutes or so that I mentioned at the beginning of this review — we are all uplifted as Efua not only triumphs in real time (escaping from Caesar), but, “guided by the spirit of her grandmother,” she triumphs for all time by graduating from college after all (five years after the story begins). As a part of that graduation, Efua delivers a valedictorian message to her graduating class that should be engraved on the hearts of all.
So, swallowing my preconceptions and my prejudice against “deeply meaningful” musical productions (Les Miz, I’m talking about you!), I have to give My Heart is a Drum an overall rave. There is so much to like. Just be warned that the show is social commentary with musical trimmings … and that, when done as well as this show is, you can put that aside and just enjoy the performance. I certainly did.