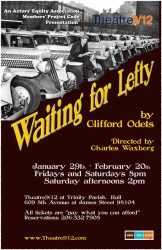 In April of last year, Seattle’s latest minimum wage ordinance went into effect, with wage increases appearing at the New Year. While Seattle might be ahead of a large majority of the country, it appears there are still some lessons to be learned about what exactly a “living wage” means.

“Waiting for Lefty” was written by Clifford Odets in 1935 about a New York taxi driver strike that had occurred the previous February. This time around, the play is directed by Charles Waxberg and put on by the actors of Theatre 912. The choice of this play for the group’s production is not an accidental one, as many of the themes of workers rights ring as relevant today as they did 80 years ago.  The play constructs itself as a series of vignettes woven around recurring scenes in a town hall-style meeting, where cab drivers debate the benefits and drawbacks of a labor strike. The vignettes in turn address the concepts of fair pay, the ethics of chemical warfare, the fear and allure of communism, the struggles of extreme poverty, and nepotism.

That might sound like a lot of things to cram into a 75-minute play, because it is. The play is not really about the cab driver strike, but rather a smorgasbord of the struggles of Depression-era America.

At the time of its release in New York City in January of 1935, Waiting for Lefty was a huge success and was performed in theaters all over the country shortly thereafter. It was not without its critics, though, who decried the play’s overtly Communist message.

By January 1936, Seattle Repertory Playhouse (now the Floyd and Delores Jones Playhouse in the University District) staged a performance of Odets’ play. There was only one showing, and it resulted in the SRP getting blacklisted by The Seattle Times.

At some points the performance by Theatre 912 felt as if it were perhaps too kinetic—as if words and ideas were going to fly out of mouths and off the stage before they could be digested. Odets’ play is heavy on dialogue and light on props, meaning that the actors have mostly an empty stage on which to present their scenes.

However, this seemed more like a curse than a blessing in terms of blocking. Many of the actors, if not all, took the empty stage as a queue to race back and forth over it while delivering their lines. Hardly a second went by, where a character was not moving to sit down, then immediately standing up, or running out the “door” just to race back in and deliver more lines.

But there were stand out performances, including Robert Alan Barnett as Harry Fatt, the compromising union leader, and Kirsten Dean as Edna, a wife and mother who encourages her cabbie husband to initiate the strike. These two in particular demonstrated two opposing sides deftly, despite never sharing any scenes. Barnett’s performance as Fatt embodied the corpulent and complacent union leader, afraid of change and definitely terrified of having his power usurped by his workers. Meanwhile, Dean’s performance of Edna portrayed the struggle of absolute poverty and how women, particularly mothers, struggle to hold everything together in the face of uncertainty and destitution.

As the play is inspired by true events, it came as no surprise that the characters in the play decide to go on strike. And while the final scene rings of solidarity, the crescendo of voices shouting, “Strike!” felt overwhelming. The acoustics of Trinity Parish Hall have a tendency to echo loudly, which made it feel like many of the actors were simply shouting over each other to be heard, not understood. But perhaps this is what spurs us to action: power held in groups of like-minded individuals, calling out “Strike!” and acting as one, loud voice against “The Man.”

Waiting for Lefty by Clifford Odets. Trinity Parish Hall. 609 8th Ave. and James St. First Hill, Seattle. Through February 20th, Fridays and Saturdays at 8 pm and Saturdays at 2 pm. “Pay what you can afford,” reservations are available at brownpapertickets.com.

Read other reviews by Madelyn Reese