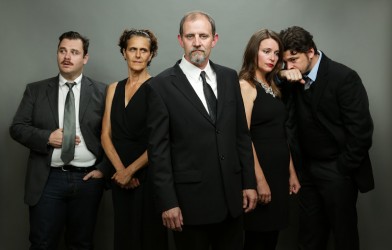 New Century Theater Company’s “Festen,” at 12th Avenue Arts, illuminates the inner workings of a family living in denial. Bright lights and encircling curtains set an atmosphere both festive and clinical in which to witness a celebration and a vivisection. The scalpel is truth: painful, provocative, shocking, and very entertaining.

The script, credited to David Eldridge, evolved from the 1998 film by the same name (in Danish) and distributed in the US as “The Celebration,” directed and co-written (with Mogens Rukov) by Thomas Vinterberg. Various European theatrical versions of the story followed, then the English-language script adapted by Eldridge. Some years ago director Wilson Milam included the script in NCTC’s Pipeline series of new play readings at Solo Bar, and a full production has now finally come to fruition with a talented cast including some of Seattle’s finest actors and NCTC company members under Wilson Milam’s mostly inspired direction. 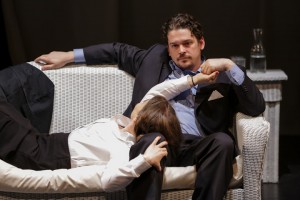 In a family-owned hotel, a 60th birthday party unfolds for the father, Helge (Bradford Farwell.) His wife Else (Amy Thone) glides with weary detachment through the currents of half-obscured conflict, as though numb or untouchable. Adult children arrive; layers of dysfunction unfold. The seemingly detestable Michael (MJ Sieber) and his now-submissive, now-rebellious wife Mette (Brenda Joyner) create the first “scene” as the boorish, uninvited brother refuses to leave the party.

His brother Christian (Connor Toms,) a successful hotelier in his own right, seems more interested in avoiding conflict than enforcing rules, and we soon discover he has an ongoing, ambiguously sexual relationship with one of the hotel employees, Pia (Emily Chisholm). His sister Helene (Betsy Schwartz) shows more backbone, but she succumbs readily to the rituals that enthrall the family in a cloud of normalcy and calm – until she reveals a game-changing secret. 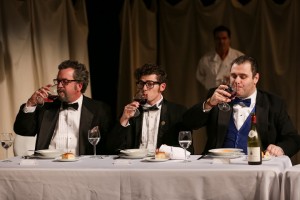 Hotel staff serve almost as adjunct family members, like the cook, Kim (Ray Gonzalez), who encourages Christian to persevere in wielding the scalpel that peels away membranes of deception and denial. Other outstanding performances include Evan Whitfield as Helmut, the manically determined but sensitive Master of Ceremonies; Michael Patten as the steward Lars, a staff newcomer who hovers above and to the side, watchful as a hawk, and as ready to follow the direction of the wind; and the hilarious, hapless Uncle Poul (Connor Nedderson) adding considerably to the ongoing comic relief that runs throughout this darkly funny play.

As in many a play, and many a family, an absent member, dead but not departed, maintains a grip from the grave on those among the living. The fourth sibling, Linda, is invisible (though to truth-wielding Christian she eventually becomes a living presence) but her story, linked deeply and evilly with his own and that of their father, is what propels a redemptive shift in the family paradigm.

It is perhaps a fault of the script, and partly of direction, if this transformation seems a little too swift and whole. It is touching but somewhat unbelievable that the self-centered, bigoted Michael, for example, manages a fond kiss to his wife and leaves the stage a changed man; the whole next-morning resolution is emotionally satisfying and beautifully rendered, but unfolds with the alacrity of allegory, rather than the slower-healing pace of real life.

This production hovers somewhere just a step removed from realism, in a world that is part graphic novel, part family drama, part allegory. This reviewer is not the only member of the audience, as revealed by the post-play discussion, who felt an uneasy affinity with a family where unacknowledged secrets eventually burst forth with disastrous but transformative consequences. The engagement of the audience and performers in the discussion is a tribute to the effectiveness of the production as a whole despite a few weak seams.

Theater can be redemptive, too, and the usual suspension of disbelief is a key to its power. For the most part in “Festen,” the bubble of willing disbelief holds; in a few spots, though, script problems  have been left unsolved, as in a series of “split-screen” scenes that leave actors to cope with awkward pauses as focus shifts from one room of the hotel to another. These bumps may smooth out as the production continues to grow. There is much richness of detail and depth of possibility already uncovered by the strong acting ensemble, technical crew, and director, and certainly more to be extracted from this odd and insightful script. 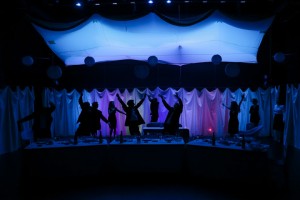 Much of the staging is effective and lively. The half-circles formed by family at various junctures, with servants arrayed behind and to the sides, aptly capture the spectacle of the family under observation and judgment by audiences offstage and on. Levels of class, power and prestige are indicated in the seating arrangements at the banquet table where the family’s dirty secret is exposed, and in other minor but meaningful choices. Actions convey meaning succinctly, as in Helge’s final departure upstage left, as his wife, Else, remains fixed at her place stage center (“I think I’ll stay here,” she says in her moment of truth,) then slowly makes her way off the opposite side of the stage. A macabre line dance under the direction of the master of ceremonies, Helmut, feels like a nightmare version of many a wedding or birthday party. 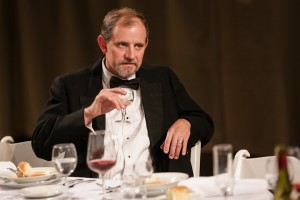 While still showing a rough edge or two, this production is polished, intense, and affecting – the revelations under those bright lights remain like retinal after-images long after the final curtain. All individual performances are memorable: Bradford Farwell’s Helge conveys steely control under a velvet-smooth exterior; MJ Sieber nails the crass, explosive brother Michael who gradually mellows as the roots of his rage are exhumed, and his wife Mette is both pitiable and laudable in Brenda Joyner’s dynamic, feisty, many-sided character. Connor Toms is engagingly sympathetic as the soft-edged but matter-of-fact Christian, who wields a sharp blade of anger with weighty strength even in his hesitation and uncertainty. Amy Thone is fearsomely calm, remote, and complicit as the matriarch Else, and her own journey is perhaps the most tragic of the play, for unlike her children, she has little left of a soul with which to rejoice in the degree of freedom she claims by the end.

Be prepared to squirm, laugh, cringe, and care about a family observed and dissected before your eyes. It is an easy allegorical leap from family to a wider society where we, too, find it more comfortable and convenient to ignore obvious truths, pretend ignorance of evil done under our roof, and blame others for sickness in the society we co-create. “For he’s a jolly good fellow, which nobody can deny,” the family sings to their father. “Festen” shows us that not only can we deny the lies holding us in their grip – to survive, we must.