Romeo and Juliet by William Shakespeare 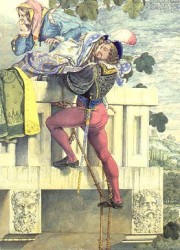 Seattle’s Young Shakespeare Workshop presented Romeo and Juliet at the Seattle Outdoor Theatre Festival in Volunteer Park at something called the Conservatory Lawn, but is really a natural stage made by the low-lying branches of a Cedar tree. The length of the play illustrated an important principle about outdoor theatre: Never go over two hours and preferably get it down to 60 minutes.

This version of Romeo and Juliet lasted more than two and a half hours, which is far too long for anybody to sit without intermissions and unnecessary for a play which the audience knows so well. It weakened the whole production.

The strength of this production was that everyone in the cast of teenagers could handle the text and delivered their lines “trippingly from the tongue” as Shakespeare himself would say. This is no-mean feat as it is something which even the professional shows in town cannot quite manage. All it takes is dedicated hard-work and coaching. It was truly impressive.

Unfortunately, some of the casting and costume choices were confusing for the audience. Often, small theatres have to cast women as men, but it is wise to make them look like men. Romeo was played not by an androgynous female but by a curvaceous female with too long pink hair which was too far a stretch. The Friar was played by a woman, but she was dressed not like a monk, but like a nursing nun, in a white veil and white robe. These small things broke the illusion.

It is always a joy to see this company because it is clear that the director pays attention to the language, but next time please cut it.

Pericles, Prince of Tyre Triumphs at Shakespeare in the Park
July 14, 2022
Equivocation–Telling the Truth in Difficult Times
February 10, 2020

“A Midsummer Night’s Dream” – Another Magical Production from The Changing Scene
December 10, 2019
© 2022 Drama in the Hood. All rights reserved.
Site Design