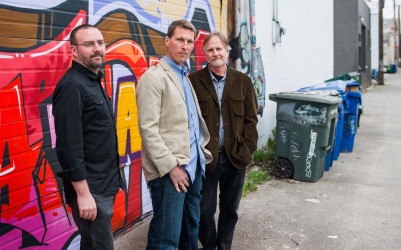 Las Cruces by Vincent Delaney. Directed by Julie Beckman,  Delaney weaves a finely tuned story with equal parts humor and pathos as he transports us to the New Mexico desert. Not far from the casinos and the spaceport, Sheridan is camped out, hiding in a gutted trailer. Everyone knows he’s there, but no one knows why. Except maybe a card player named Soledad

Chosen Less, by emerging playwright Phillip Lienau, reveals a chance meeting on the street where two men learn the hard way that leaving is not the same as escaping, and that dreams can change in the chase. Kelly Kitchens (Associate Artistic Director at Seattle Public Theater, and 2014 Gregory Award for Outstanding Director), directs this poignant tale. Mr. Lienau serves as Lecturer of Scenic Design at the University of Washington. Chosen Less is his first produced play.

Why Do We Keep Broken Things, by Carl Sander.  It’s 2011 in Seattle: Mike McGinn is in office, Bertha is in Japan, pot is illegal, and the Occupy Movement is camped out in Westlake Park. Directed by Tim Hyland (Wooden O, Seattle Public Theater), five inhabitants of the city collide in a kinetic collage of civics, sex, and estranged friendship, leading us to ask why some things change and others stay the same.