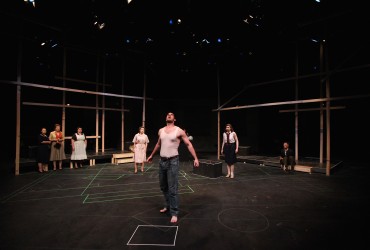 No Picnic for Women in Small Town USA in 1950’s

Seattle University’s fabulous production of the Pulitzer Prize-winning American Classic Picnic by William Inge, directed by Ki Gotteberg, opened on Friday night at the Lee Center on 12th Ave and demonstrated that small town life for women in the early 1950’s was indeed no picnic.

First performed on Broadway in 1953, the director Joshua Logan, who also directed the film in 1955, insisted on changing the ending to what was perceived as a “happy ending” in the saccharine days of the 50’s.   However, viewed from the knowledge gained after nearly 70 years of enlightenment about alcoholism, domestic violence predictors and feminism, the ending of Picnic struck a very artificial cord. About the original version of the play, William Inge said:

“A couple of years after Picnic had closed on Broadway, after the film version had made its success, I got the early version out of my files and began to rework it, just for my own satisfaction. Summer Brave is the result. I admit that I prefer it to the version of the play that was produced [originally], but I don’t necessarily expect others to agree . . . I feel that it is more humorously true than Picnic, and it does fulfill my original intentions.”

The action of Picnic takes place over 24 hours on Labor Day, on the back porches and back yards of two next-door neighbors in a small town in Kansas in the early 1950’s.   The characters are all single women in an era long before the sexual revolution, and through the plot and the back stories of the characters, the author depicts the limited choices available them.

Trying to maintain a fragile sense of respectability,  a single mother Flo Owens , who had been abandoned by her alcoholic ne’er do well husband, has been trying to raise two girls, Madge, age 19 and Milly, age 15,  on her own.    The girls are polar opposites.  Madge is a Beauty Queen who barely passed high school, where she tried but did not acquire secretarial training, and works in a dime store.  As a great beauty, Madge has never had to develop herself and she is being heavily groomed by her mother to cash in on her beauty before it fades and marry her steady boyfriend, the son of the town millionaire.  Milly is socially awkward, observant and has set her goals on going to college and developing herself, but is not indifferent to the opposite sex.

Rosemary, the schoolteacher who boards at Mrs. Owens’,  is no spring chicken, maintains a façade of indifference to the prospect of getting married, but is still of “marriageable” age.  She has two friends, Irma and Christine, who seem to do all their real living while out of town, at conferences or summer school, but whose encounters with men appear to be imaginary.  Of course, all the schoolteachers were bespectacled in an era when the phrase “Boys don’t make passes at girls who wear glasses” was the gospel truth.

In the house next door,  Mrs. Potts,  a middle-aged spinster, who many years before had had her elopement to an “unsuitable” man annulled,  has been taking care of her aged mother for what seems like forever.

The lives of the women are socially and economically limited by the geographic isolation of small town life, the rigid sexual repression of single women, ultimately caused by the lack of effective birth control.  All the societal oppression of women was intensified by living in a small town.  If schoolteachers did not live like nuns, they lost their jobs.

Into this mix of sexual frustration, enters Hal, an attractive testosterone-filled drifter who struts his stuff like a rooster in a hen-house and is a catalyst for change.  Hal is in fact a scared kid, with sociopathic tendencies, who can charm everybody with his only positive attribute-his physical prowess and attractiveness.

Since Hal and Madge both feel that no one values them beyond their physical attractiveness, they appear to fall in love with each other, spend the night together, and when Hal is run out of town, Madge follows him.  In Inge’s earlier version, Madge does not run off with the Hal.   The ending of the play is unsatisfying since one of the themes is liberation but  Madge’s liberation from the small town looks like it may end up in an unpleasant form of slavery.

For a student production, this Seattle University Production was outstanding.   Picnic demands a big versatile space because all the action takes place on the back porches and in the backyards of two houses right next to each other. The abstract set in the Black Box of  The Lee Center of the Arts on SU’s campus provided just the right sense of open outdoor space but also the sense, as one has in a small town, that everybody was watching everybody else.  Which indeed they were!

Director Ki Gottberg managed to get outstanding performances out of the cast, especially Sean Anderson-Branowitzer as Hal and Gabrielle Sigrist as Rosemary, one of the desperate schoolteachers, who does not passively accept her fate, but actively fights for a respectable outlet for sex by begging an indecisive man who is clearly “husband” material to marry her.

Fortunately, Ms. Gottberg brought in a highly competent vocal coach, Brennan Murphy, so that the whole cast, even in moments of high emotional intensity had voices which engaged the audience’s attention, and did not resort to shouting and screeching, which one hears all too often on Seattle stages.  Everyone was audible in the last row, where I sat, and although the language of the play was colloquial, the diction was clear and none of the lines were mumbled.  Having good vocal technique added an immensurable dimension to this play.

For those of us old enough to remember when women desperately clung to the idea of demonstrating that they were “ladies” by such symbols as hats, gloves, heels, and stockings (even on hot humid Labor Day) , the details by costume designer Michael Notestine were impressive.  He got all the details right, even down to the seamed stocking which were prevalent in the early 50’s.

For anyone who likes 1950’s music, this was certainly a delightful evening, the pre-show music was swing and the sound effects by Meghan Roche were superb and evoked all the intimacy of small-town life-train whistles, accidental explosions,  cars driving and stopping on drive-ways, doors slamming etc.

Although I find the play’s messaged flawed and dated, nevertheless it is extremely interesting.  Like Tennessee Williams, Inge was a closeted homosexual, who could not write openly about his sexuality; instead he had to use the cover of a heterosexual “forbidden” relationship to write about his wish for “sexual liberation”.

Openly expressing his honest sexual feelings was as taboo for Inge as it was for a single schoolteacher in a small town in Kansas in the 1950’s,  or for a gorgeous girl of that era to admit that she is more emotionally attracted to someone who is “fling” material than “husband” material.  Nowadays we have the luxury of experimenting without the heavy consequences.  Picnic is historically fascinating in the same way that Mad Men is, one can observe by-gone social mores from the our current perspective.

This is an extremely well directed play with high production values, thought provoking and well worth seeing.  Dinner at nearby Café Press is also highly recommended.