Sex’d, an adaptation of La Ronde by Arthur Schnitzler 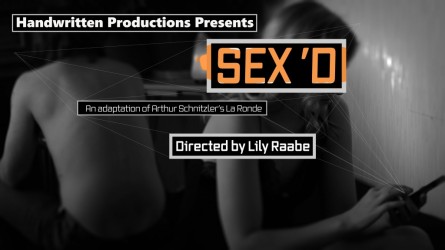 Round and Round the Sexual Merry-go-Round, circa 2015

La Ronde was the name of the French translation of Schnitzler’s play Reigen ( to dance around) when it was filmed in 1950 by Max Ophüls, and somehow the name stuck.  The original play, like this production has ten scenes of various couples engaging in foreplay, stylized coitus and afterplay.   The couples are like a relay team, couple A & B hook-up, then B & C, C & D, etc.  Unlike the original where there is cross-class coupling, in this modernized version there is gay coupling, hetero-coupling and bi-sexual coupling.

To explore the themes of how sex is used as a way to connect as well as a substitution for intimate connection, the director, Lily Raabe really updated the play by having all the sexual encounters arranged not by an online dating site but by an online strictly hook-up site for both gays and straights and literally everything in between.

Although the basic format of the evening stuck to the script, it was, in fact,  an improvised performance, and what a performance it was!!!!  The acting was out of sight and it was funny, sad and spoke nothing but the truth about our need for, and fear of human intimacy.

The show started off with Tim Takechi as Ryan and Brandon Estrella as Shaw, as the first gay hook-up, in which Shaw appears to be just in it for the sex, but really wants business connections, and Ryan actually is looking for love.  It included all the power/love/lust permutations associated with casual sex and included  stellar performances by Madison Jade Jones as Amber, Cameron Duckett as Max, Madeline Noonan as Zoe, and Lindsey Porter as Fiona.  Rhys Henley as Hank turned in a brilliant performance as a hip modern heterosexual, who is unexpectedly guilty about being uncomfortable about his open relationship with his wife. So much for the sexual revolution.

Wisely, the director kept the set to a minimal and added some interesting technological touches which made a profound statement about how social media parraells sex, it is both a means to connect and a means to isolate us from intimacy.

However, every night promises to be different, but if each night is as fantastic as opening night, it promises to make you laugh, cry and in the end feel happy as the ending is up-beat and a positive statement about love.  And sex.

Since it is a Pay-What-You-Can production and parking is free after 6 pm, you really can’t beat the price.