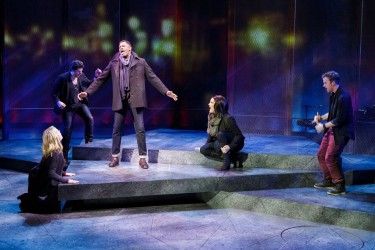 The ACT/5th Avenue co-production of “Jacques Brel is Alive and Well and Living in Paris” recasts the Broadway musical in a snazzy, eye-pleasing multi-media experience that spins songs like a rack of greeting cards in an upscale gift shop: catchy, colorful, seductive, and always opening to reveal the twist, surprise, or shock that is Brel’s trademark as a composer and lyricist. Director David Armstrong and Musical Supervisor Joel Fram fashion an entertaining evening that ranges from astonishingly powerful to surprisingly touching, with one or two unfortunate moments of banality, like any collection of greeting cards. 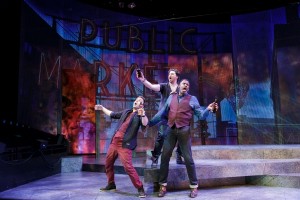 Belgian-born Jacques Brel was already a major star in Europe when the Broadway musical — a raucous, iconoclastic romp through culture and politics — caught the imaginations and minds of American audiences in the culturally-politically fraught year of 1968. Translated and adapted for the stage by Eric Blau and Mort Shuman, the show enjoyed a long initial run off-Broadway and later productions in cities across the United States and around the world.

Brel fearlessly skewered many golden calves of his time – conventionality, patriotism, romanticism, propriety, and more. Seattle audiences at this production will discover a Jacques Brel alive and tamed, his “noir” sensibility a bit retouched and softened (was the fog in the air really necessary?) for Seattle’s comfortable theater crowd. Still, it’s hard to do a song like “Middle Class” without firmly poking a stick in the eye of any audience, while “Next” or “The Statue” both throw harsh light on the dehumanizing cynicism of a society that treats individuals as either scum or heroes, according to the expediency of the moment.

David Armstrong has gathered a talented crew of performers, who best shine in their solo pieces and two-or-three voice numbers. Costumes, assembled by Harmony Arnold and the cast, are pastel and earth-toned, with occasional exotic splashes. A four-piece band under the direction of Dwight Beckmeyer successfully moves from foreground to background, providing a solid, if occasionally tinny, accompaniment. The splendid set design by Tom Sturge raises a pixillating screen of perforated steel behind which the deep saturated colors of an “abstract expressionist” image appear, shift, and return, while on the screen and across the stark planes of the stage are projected ever-changing images, shadows, and light effects.

The show opens, after an underwhelming overture, with the brash ensemble piece “Marathon,” set (as in the 1975 film version) against fast-moving images tracing a horrifying, helter-skelter progression of history of the 20th century. From this full-cast, full-on show-stopper, we zoom to the opposite end of the Brel spectrum: “Alone” – a poignant, emotionally controlled solo by Timothy McCuen Piggee that pierces hearts with the inevitability of loneliness. 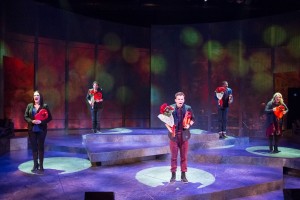 From this condolence card we turn to a bright, funny-until-it-hurts Valentine’s Day card, “Madeleine,” in which the ensemble reappears to tell the story of a hopeful, hapless wooer who persists in his love of the never-to-be-seen Madeleine.

Kendra Kassebaum and Cayman Ilika complement each other less effectively in costume and voice. Ms. Kassebaum’s solo “I Loved” draws attention to the clunky high-heeled pumps on which she teeters throughout the show, her powerful voice undermined by a studied physicality that may be partly blamed on fear of tumbling. 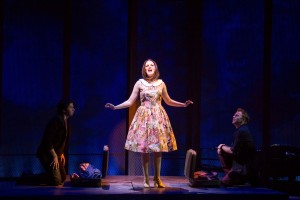 In “Timid Frieda,” where irony repeatedly punctures the surface sentimentality, Ms. Ilika undergoes a fascinating onstage costume change while her crystalline voice tells the story of the remade Frieda; her emotionality is more fluid and convincing than Ms. Kassebaum’s; the two female voices and their characters seem awkwardly paired.

Quibbling aside, the show is entertaining, engrossing, stirring, and remarkable in its range of subjects, reflecting Brel’s genius and originality. Pacing and clarity are top-notch (though the sound is a bit over-miked and reverberant). Each “greeting card” tells its story with alacrity, unpacking a surprise, often with a good kick as well.

All actors have stand-out moments and pieces: Timothy Piggee’s superb comic gifts in “Funeral Tango” and “Jackie;” Cayman Ilika very affecting and authentic in “No Love You’re Not Alone” and “The Old Folks;” Eric Ankrim in “The Bulls” and “Next” nailing the dark twists and sudden turns of Brel’s inventiveness; Louis Hobson stunningly bitter in “The Statue,” and funny as hell in “Bachelor’s Dance,” then heartbreaking in his surf-side ramble through regret in “Fanette” (the projected wave images are sublimely integrated.) 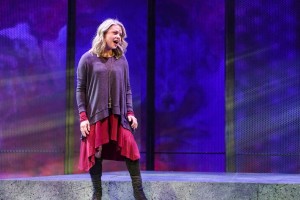 Kendra Kassebaum fully redeems herself in a masterful Act Two rendition of “Ne Me Quitte Pas.” Singing in French at a classic stand-microphone in a pool of light, accompanied by Greg Fulton on acoustic guitar and with her split images projected on the screens behind, Ms. Kassebaum achingly fills the song’s huge, understated emotional space. For comparison, rent the 1975 film version if only to see Brel himself, seated at a café table with a glass of beer and a cigarette in hand, deliver a gorgeous rendition of it, only three years before his untimely death. 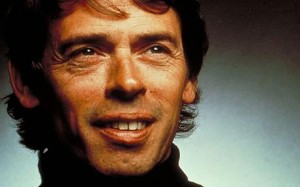 As a tribute to a modern troubadour unlike any other, “Jacques Brel Is Alive and Well and Living in Paris” (shall we just call it ‘JBIAAWALIP’ for short?) delivers a rich and memorable evening’s entertainment. It is hard, however, to overlook the disappointing final number, “If We Only Have Love.” The song begs to be done simply and with a certain naiveté; in 1968 this was probably easier to pull off than in 2015. David Armstrong (or is it Joel Fram?) positions the singers with their arms at their sides, facing the audience, without movement or other ornamentation. Simplicity and sincerity are the goal, one assumes, and the actors strive to pull it off, but it looks like hard work, especially as the ensemble and orchestra build to a blaring, ill-blended crescendo. The starry background to this song in the film included a whimsical cartoon-like Saturn amidst the heavenly bodies, allowing the audience a slight taste of tongue-in-cheek along with the well-meaning message. Here, unfortunately, the finale reads all Hallmark, all the way.

“Jacques Brel Is Alive and Well and Living in Paris”