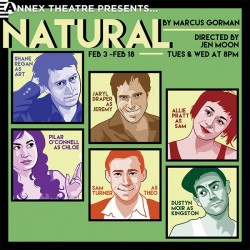 Natural, written by Marcus Gorman, directed by Jen Moon, opened Tuesday February 3 at the Annex Theatre. It is a play about sex, drugs, and love, but is also predictable.
Vulgar humor, name calling, a generation obsessed with sexuality and changing sexual partners like a Blockbuster rental movie are the heart of this play. The powerful sexual theme throughout the play brings these larger than life, outrageous characters back to the ground- he who is withholding sex has the power, this makes the other characters feel a bit more like the rest of us, trekking through life and relationships.
Chloe, the loud, vulgar, erotica editor, played by Pilar O’Connell flings derogatory names like daggers at the rest of the cast. A typical woman, moving from part time job to part time job while trying to make a go of writing her blog, meets Jeremy, played by Jaryl Draper, the egotistical, guy’s guy, who only thinks about sex. The two clash in a predictable love/hate relationship. The name calling, and arguments that we all have behind closed doors is on display for everyone.
The over the top, flamboyant, boy crazy Kingston, played by Dustyn Moir, is the cliché gay man in Natural. The outrageous and obvious crush on Theo- a taken man, although this doesn’t dissuade Kingston, is played out in an aggressive pursuit. Theo ultimately succumbs to Kingston’s advances, albeit after a crushing ending with his partner Arthur, which only tangles the web of relationships, that is the plot of this play.
The twist in the play comes from Samantha, the bar tender and ex stripper, who is just trying to support her child. Played by Allie Pratt, Samantha is charged with distracting Arthur from his job, but along the way she makes you wonder if she didn’t fall for Arthur as well.
The emotionally tangled up, socially crisscrossing confusion about life in general, and in these characters brings to life real issues with which we all struggle.  Love, sexuality, loss, and fear are portrayed by all of the cast member honestly.