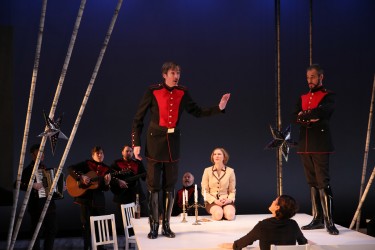 The Seagull Project opened its latest production, Anton Chekhov’s “The Three Sisters,” Thursday night, January 22, to loud acclaim from a friendly audience. The acclaim is well-deserved. The production, while somewhat uneven stylistically, casts the intense light of a microscope on the human condition in a world infused with laughter, sorrow, loss, compromise, hope, death and, ultimately, mystery. 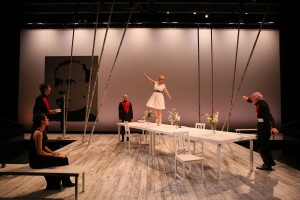 At the top of the show, the thrust stage of the Gregory Falls Theater at ACT seems almost cluttered with icy white set-pieces: a wide table diagonally bisects the space and forms a sort of stage within the stage; spindly trunks angle upward, suggesting both birch trees and strands of meaning or connection; benches provide movable blocks and changeable boundaries; three chairs clumped together downstage center contrast with a single, rear-facing chair poised at the precipice edge of the table. A glowing backdrop acts as a microscope slide for precise examination of interior and exterior details; a hugely magnified human face, vaguely familiar and Russian in aspect, glowers into the distance. 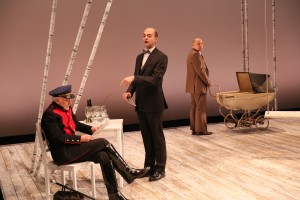 Into this frozen landscape a drumbeat calls forth a large and vivid cast of characters. The sisters: Olga (Julie Briskman, emotionally convincing and accessible as a motherly oldest sister); Masha (Alexandra Tavares, whose cold resignation to an unhappy marriage touchingly and tragically blossoms into the fleeting happiness of a passionate affair with David Quicksall’s dashing, tender, philosophical Vershinin); and Irina (Sydney Andrews, a grown-up child who longs for but soon regrets the burden of work to do in the world.) Their feckless brother Andrey (John Abramson, deftly played as a weak man caught in traps of his own devising) and his eventual wife, Natalya (boorish, overbearing Hannah Victoria Franklin) provide a fulcrum for the tilting world. Masha’s pedantic husband Kulyigin (Brandon J. Simmons) adeptly treads a line between clown, pedant, and wronged but forgiving husband; officers of the regiment stationed in the city march or stagger in and out, bringing life and community. A local doctor, Chebutykin; a wealthy count, the love-lorn Tusenbach; a sergeant, the ironic, bitter Solyony who suddenly bares his soul to Irina, offer contrasting images of manhood. Servants and musicians bring their weight to the story in their small but significant ways.

The sisters, cast out of their childhood Eden by their father’s removal to a provincial backwater, long for the day they will return to Moscow, emblem of an idyllic state never attained in reality by any characters. In four entertaining and swift-moving acts, various hopes and desires, alliances and rivalries, tragedies and moments of hilarity, expand our insight into each character’s unique experience in the world. 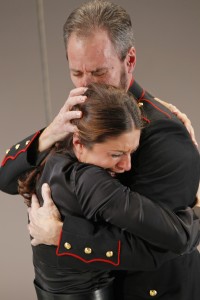 The stage design by Jennifer Zeyl and lighting by Robert J. Aguilar provide a rich playground for the actors, whose characters’ complexities and changes unfold like layers of membrane peeled away under a vivisectionist’s scalpel. Under John Lang’s direction, the ensemble’s months of work pay off in memorable and revealing moments such as Masha and Vershinin’s first meeting, where the subtext of their sudden attraction to one another is spoken in entirely physical details of eyes and limbs and postures. The sadistic mockery of Count Tusenbach (played with dexterous affability and gradually increasing depth of purpose by C.T. Doescher) by Sergeant Solyony (a frighteningly antisocial and emotionally repressed Tyler J. Polumsky) caroms the two men around the stage like mutually repelling magnets, viscerally repellent to one another. 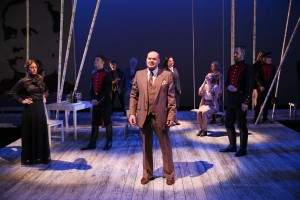 Chekhov’s contemporary accessibility and relevance is startling in performances rooted in relationship and emotional authenticity. Some directorial choices, however, seem to undercut the realism achieved or sought by the cast: Irina’s table-top delivery of “Moscow! Moscow! Moscow!” at the end of Act Two visually over-emphasizes the passion and inaccessibility of her dream; the transformation of the bumbling, uncertain Natalya into a viperous and manipulative Jezebel by Act Two is so abrupt it leaves the very brave Ms. Franklin with little room to grow. 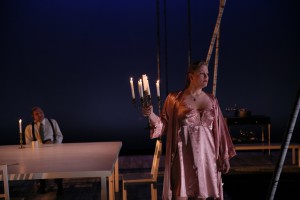 The Seagull Project’s lively and deeply engrossing staging of “The Three Sisters” is noteworthy for its clarity. With a cast of 16 actors on a large, full stage, in a hundred-year-old play set in a Russian provincial city, things could have been a muddle. What muddling there is, especially in Act Two, is part of the story: the relative simplicity of Act One gives way to the complicated realities of a time further removed from childhood. Successive times expose revised truths, changed boundaries, darker and deeper layers of personhood. Inventive, captivating performances and staging gradually single out and illuminate each of the characters and their life through time – in the two-and-a-half hour “stage-time” of the show, and in the universal time of humanity.

Each character in this production, from lowly servant to the triumphant, upwardly mobile Natalya, has its place and purpose. Together, in a series of exposures, wriggling under the microscope lens, a familiar trajectory emerges of a family, a community — the life of a given generation of humanity, including our own — painfully and humorously struggling with its own truth about human experience. What is that truth? “If only we knew… If only we knew…” 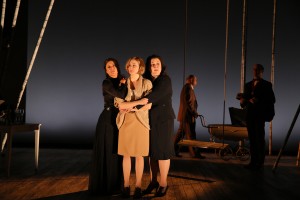 The Three Sisters, by Anton Chekhov, translated by Carol Rocamora