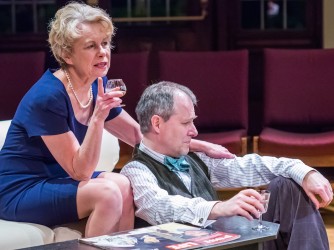 Trinity Parish Church, a picturesque stone edifice with an antique-looking spire and European aspect, seems an unlikely venue for Edward Albee’s darkly funny examination of conflict, denial and survival in an American family, but when the Parish Hall lights dim and the set brightens, the tight-knit ensemble of Theatre9/12 deftly animates an intimate journey through Albee’s witty piece of cultural criticism.

In the capable hands of director Charles Waxberg, this mixed crew of union and non-union actors have crafted a rich exploration of relationships amongst their complex characters. Agnes and Tobias survive an exhausted marriage in an alcohol-infused dance of avoidance. The steely Agnes (a riveting Therese Diekhans) is clearly the fulcrum and main pillar of the family dynamic, holding in check her mostly cowed husband Tobias (Terry Edward Moore, excellent in a role that gradually exposes layers of conflict and guilt) and making no secret of her disdain for her alcoholic sister, Claire (Mary Murfin Bayley, awkwardly frail, self-mocking, and pitiable – until she reveals her incriminating secret.) 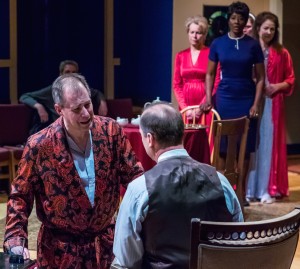 Like a barely tolerated jester, Claire speaks truths that threaten Agnes’ control, while Tobias, the softener of edges, gently restrains her, enabling her drinking while encouraging her to seek help. Then, in a typically Albee-like plot turn that verges on the absurd, the couple’s long-time friends Edna and Harry (Rachel D. Pate and Eric Newman, scarily straight-faced, believable clowns) appear at the door asking to stay the night, claiming their own home has been invaded by a nameless fear. 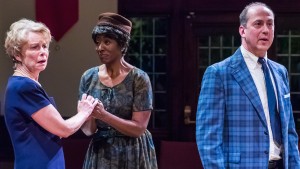 The astonished Agnes and Tobias see nothing they can do but offer the empty bedroom of their thrice-married and divorced daughter, Julia. Into this out-of-kilter setting Julia returns (Samantha A. Camp, raising the wattage considerably with her outspoken rage and teen-like contempt for her ineffectual parents) and sets the delicate balance of household relations even further askew.

Theatre 9/12 is a unique crucible of talent. Company members take part in weekly master classes, building and honing skills through workshops and performances. Previous shows have included Theresa Rebeck’s “Seminar,” “Doubt” by John Patrick Shanley, and Anton Chekhov’s “The Cherry Orchard” at ACT Theater. By no means allow the humble and unusually intimate setting of the church Parish Hall to deter you from catching “A Delicate Balance” during its three-week run. Some of Seattle’s finest actors and emerging talents are involved in the chemistry that makes this show tick. 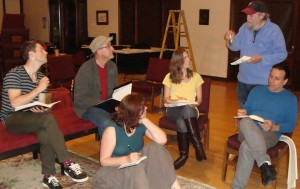 Albee is a master of ambiguity and suggestiveness; themes abound in this Pulitzer Prize-winning play. What stands out for this writer is the question: are humans capable of change? Do we want the happiness, and risk, of real freedom, or prefer to rest in the torpor of the familiar, like frogs in a slowly heating pot of our own misery? Edward Albee, through the dark lens of his embittered muse, suggests that individuals, and by extension America as a culture, ultimately will choose the devil we know over the unwelcome occupancy of our lives by anything that threatens to overthrow the status quo, however unwholesome that may be, and however radically liberating the alternative might prove.

And yet, there is a kind of awakening that occurs in this play; the numbing alcohol is replaced by morning coffee and a buzz of – not excitement, but perhaps resignation that a new day has come, and life with all its commonplace imperfections and defeats, does go on.

A Delicate Balance, by Edward Albee