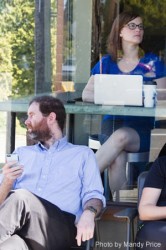 Who do you say you are?

Two actors explore the presentation of self.

Written and directed by Aimée Bruneau and performed by Sam Hagen and Erin Stewart, Profile is a one-hour play of monologues, spoken by several character who are all interconnected, although the audience does not see the connections until the end.  The characters all go through various stages of life, experiencing courtship, divorce, single-motherhood, disappointments, and recount their inner-most thoughts to either the audience or a therapist.   All the characters develop and grow as a result of their experiences so the audience is invested in them emotionally.

Playing many roles without the benefit of costumes the acting by Erin Stewart and Sam Hagen was quite exceptional.  Erin Stewart was able to differentiate her characters using physicality and different voices so much that it took me until half-way through the show to realize she was the only female on stage!!!!!

Although the play dealt with serious themes, it was very funny, zippy, and the writing was quite amazing.  This show is a must see!