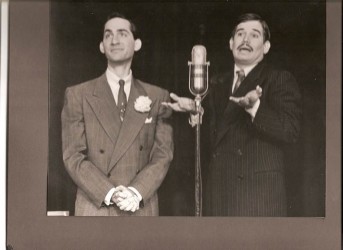 Garrison Keillor did it, now Seattle’s Arne Zaslove does it.

In the early 70’s nobody thought it could be done: to revive old time live radio broadcasts, but Garrison Keillor did it with the Prairie Home Companion; now Seattle’s Arne Zaslove is doing it with the Big Broadcast Renuion.

Arne Zaslove is bringing together a group of old friends: Jack Benny and Rochester, George Burns and Gracie Allen, Vic and Sade, Baby Snooks, the denizens of Allen’s Alley, a couple of U.S. Presidents, and more.  For one show only, 8:00 p.m. at the Century Ballroom on Capitol Hill, on Friday, July 18, audiences can enjoy ‘The Big Broadcast’ as the Bathhouse Theatre used to present it.

“I created the The Big Broadcast originally in 1977 when I first took over as Artistic Director of the Bathhouse Theatre.  At the time you couldn’t just order scripts from Samuel French, we had to transcribe them from ancient old LP’s.   There were a few books with scripts from the 30’s and 40’s but that was it.  The impetus for the show was a daytime radio show buried among the soap operas; it was a comedy by Paul Rhymer, called Vic and Sade.  It has had a cult-following since the 30’s. John Miller, a much older painter teaching at Cornish told me about it, so I looked it up in the library.  It was brilliantly written with martini-dry humor and so funny that I got kicked out of the library for laughing so much. So I felt a message from the great God of radio to revive it and put it on stage.

For 25 years, at every show at the Bathhouse, we would perform a Vic and Sade 15-minute sketch and since it was so successful, I did a full two-hour show as part of the regular season.  It toured up and down the West Coast from L.A to Vancouver, to the Moore and the 5th Ave, and to the Midwest and New York.” said Arne Zaslove, Artistic Director of the Hit and Run Theatre.

The Big Broadcast Renuion is a fund-raiser for Zaslove’s Hit and Run Theatre which staged the awesome live cabaret performance of Tom Lehrer’s Poisoning Pigeon’s in the Park, at West of Lenin in the summer of 2013.