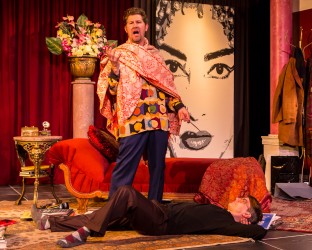 Or so it seemed in the First Act of The Liston Traviata by Terence McNally, produced by Theatre 22, at Richard Hugo House, as the first annual installment of their June “Pride Series”.  Although this play discusses profound relationship and personal issues against a backdrop of gay life, at a pivotal historical time and place, its message is universal.

In an over-the-top aesthete’s apartment in Greenwich Village, The Lisbon Traviata opens with two middle-aged best friends sitting around after dinner, having trouble deciding which opera to listen to.  Both have encyclopedic knowledge of operatic productions as well as operatic recordings.

There is a slight hitch because Stephen, a senior editor at one of the big publishing houses in New York City, has forgotten to bring a famous recording of the Lisbon Traviata. Since it was a bootleg recording, only 2,000 copies exist and therefore is highly coveted by opera aficionados. ( N.B. A cast member made the unauthorized recording, backstage when Maria Callas sang the lead in Verdi’s La Traviata in Lisbon in 1958.)

Stephen, played by Daniel Christensen is the more “mainstream” looking of the two.  Sheer unadulterated camp is how I would describe Mendy.  Their rapid fire dialogue appears to be about their mutually shared obsession with opera, but, in fact, is merely cover for Stephen’s un-diluted terror concerning his crumbling relationship with his long-term partner, who is courting a younger man.

Stephen and his partner, Dr. Michael Deller,  played by Sean P. O’ Bannon, have been as close to married as a gay-couple could be in those days with joint property, but appear to have an “open” relationship, which is threatening their stable “marriage.”

Significantly, the play takes place in 1985,   With an Aids epidemic lurking around every bar and bathhouse in Greenwich Village, it was a scary time to be dumped to face middle-age “tricking”  ( the now passé nomenclature for casual sex) At the time, little was know about Aids, and it was the kind of mysterious death sentence normally associated with pre-20th Century diseases.

The structure of the play more or less imitates every opera but La Traviata by Verdi,  more specifically.  Adapted from La Dame aux Camellias by Alexander Dumas fils, the heroine,  Violetta, dies of the 19th Century equivalent of Aids-tuberculosis, in the arms of her lover, after he has betrayed her, humiliated her and reconciled with her.  Of course like many operatic heroines dying of consumption in the 19th Century, she sings a magnificent aria with her last breath.

The second act of the play takes place when Stephen and his partner, Mike, definitively have “the talk” that ends their relationship.   During that talk, it is revealed that their relationship, like all marriages, can’t be sustained because of Stephen’s emotional self-centeredness manifested by using his opera mania to distract himself from his emotions and his partner’s needs.  .

The scenes in which the two finally talk are extremely moving, sad and express a universal truth about virtually every marriage.  That is to say, how to deal with the disappointments in one’s partner, how to grow through the bad patches, change and repair or admit defeat and move on.  Daniel Christiansen as Stephen played the scene with intense emotional truth and it was directed with a delicate touch.

Mostly, however, the play is simply hilarious. The  Lisbon Traviata is an example of how the best kind of humor expresses profound truth about the human condition and its absurdities.  McNally is also one of the wittiest playwrights since Oscar Wilde.   Stephen and his pal Mendy are a bit like Sheldon Cooper and Leonard Hofstadter in their devotion to opera.  If you know opera, you will find it hilarious, if you don’t know opera you’ll probably find their obsession even more hilarious.

The production itself was brilliant on many levels.  First of all there was the script-it was a perfectly crafted tap dance of wit.  The set designs by Gerald B. Browning, who also directed, were spot-on.  In the first act, we know a huge amount about the personality of the Mendy, our campy aesthete, as well as the historical time-period just by his over-the- top apartment.  However, in the second act, the apartment of Mike and Stephen is a total contrast-modern and sleek, which suggests that a functional apartment is important to at least one of the occupants, which hints that one of them cares about emotional and relationship functionality.

Directing this play was extremely difficult because the first act is merely one long conversation and it could easily have been a radio play; however the director Gerald B. Browning was more than up to the task, and moved the actors around the stage in rational ways that looked natural.  The actors all managed the requisite comic timing and did justice to the script.

Costumes by K.D. Schill reflected the various personalities of the characters.  Mendy, in the second Act, wore some appropriate clothes for Greenwich Village in the 80’s.  “Understated” was clearly not part of his vocabulary.  Frankly, I don’t quite know how the Sound Designer, Joshua Blaisdell, managed to do it, because it really did look like every sound cue was done by the actors-and there seemed to be an infinite number of sound cues.

All in all, this was an immensely funny play, which also expressed some serious truth about the human condition, all the while entertaining us with some of the best music and singing from Western Civilization.