Kavalier and Clay — A Great Escapade 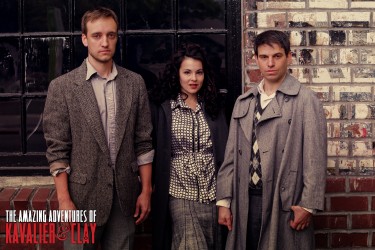 Period furniture, costumes, and props; art deco cityscapes and live jazz music; stage magic and terrific acting by a powerhouse ensemble make Book-it Repertory’s “The Amazing Adventures of Kavalier and Clay” an unforgettable journey. A fictional look into the creativity and collaboration between two cousins, creators of an entirely believable comic book hero they call “The Escapist,” the evening has something of the feel of a night at home watching four consecutive episodes of “Mad Men,” but with a good deal more laughter, depth, virtuosity and heart.

Michael Chabon’s 2001 Pulitzer Prize-winning novel is itself a wildly creative romp through the roughly two decades of the Golden Age of Comics, and a more sober view of the destruction of a family in the holocaust of Eastern Europe and its Phoenix-like resurrection in post-war America. 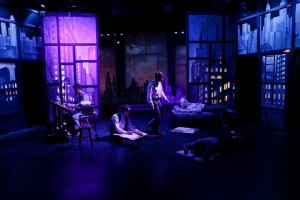 Though fictional, the stories of Czech immigrant Josef Kavalier (played with convincing Czech stoicism by Frank Boyd) and his American cousin Sam Clay (David Goldstein, in a character whose layers slowly peel away to the bare soul) are based on actual writers and artists behind such Golden Age creations as Superman, Wonder Boy, Captain America, and dozens of others. Fact and fiction flow side by side in this story, like the truths and lies its protagonists tell each other and themselves, like the stage magic that deceives, mystifies, entertains, and provides both literal and figurative escape.

With customary inventiveness, the Book-It team under Myra Platt’s direction has labored through many drafts of the script (adapted by Jeff Schwager) to bring Michael Chabon’s book to the stage, breathing life into the “clay” of literature like the mythical Rabbi of Prague who animated the Golem referred to in the story as possibly the world’s first “superhero.”

Vivid set, lighting and costume designs enable dozens of rapid changes to locales as diverse as an office in the Empire State building, a train station in Prague, a New York City subway, a Los Angeles mansion and an isolated military outpost in Antarctica. In a brilliantly amusing set-piece in the second half, a comic book story springs to the stage as a “Luna Moth” episode in the basement of the New York Public library; the conventions of comic book form, character, dialogue and suspense electrify the scenario almost magically, like so much else in this engaging production.

Despite the show’s 5-hour duration (including an intermission in each of the two parts separated by a 40-minute dinner break with meals available upstairs), the entertainment never flags. Myra Platt’s well-practiced directorial hand keeps the pacing swift and the 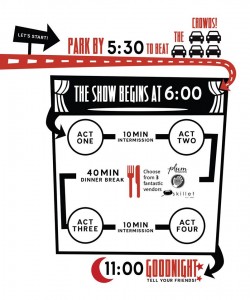 timing sharp; set changes are handled dexterously; live and recorded music provide just enough atmosphere; character and scene transitions and seem pulled from a magician’s hat. It is a long evening, but the actors seem tireless and the story has enough twists and turns and interesting characters to hold an audience enthralled.

Amongst the large and talented cast the quality of performance is consistently high; a few characters do stand out: Richard Arum conveys with seeming ease the likable but crass publisher Sheldon Anapol, bent on making the most he can from the “trash” his underpaid writers and artists produce; Bill Johns and Michael Patten jump from one role to another with delightful virtuosity (Michael Patten’s wheelchair-bound arch-villain in the Luna Moth sequence is especially memorable); Opal Peachey crafts a convincing and emotionally grounded character arc from young painter in Hollywood’s avant-garde art world to a loving mom and lonely housewife in post-war suburbia. 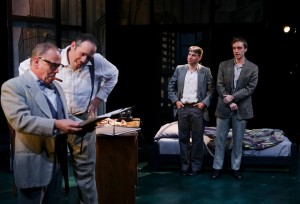 Gary Taylor brings suitable gravitas to his role as Bernard Kornblum, the old magician and escapism tutor to the young Kavalier, and steps readily into other ensemble roles. Nate Kelderman impressively switches from Kavalier’s idolizing young brother left behind in Prague to his very American and independent-minded son in America; Carol Silverstein and Amy Korver fill various amusing character roles with delightful attention to details.

The richness and creativity of this show is impossible to convey in a short review. In her thoughtful director’s notes in the program Myra Platt mentions the challenge of balancing one’s own artistic vision with that of collaborators, a central theme of the book. Given the production’s delayed opening and the risk of tackling Michael Chabon’s epic novel, there must have been many “pangs of creation” along the way. Those who brave the journey and experience this remarkable production will be well-rewarded for the occasional pangs of a 5-hour theater happening; it may be Book-It’s most astonishing creation ever.

“The Amazing Adventures of Kavalier and Clay” by Michael Chabon