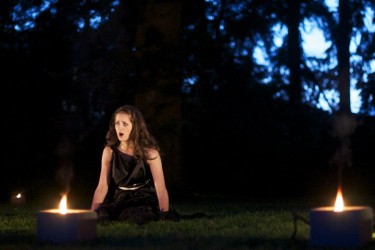 Rarely performed, The Rape of Lucretia by Benjamin Britten, is definitely for opera addicts; that is to say, people so in love with operatic music that they will sit through any opera, even if the libretto is a dud, and even if, as was the case with the Vespertine Opera’s production at St. Mark’s Cathedral, the audience can not even see the singers on the stage.

Lucretia, sung by Julia Benzinger, is a semi-legendary figure in the history of the Roman Republic.  While the Greeks were besieging Rome, Tarquinius, played by Jose Rubio,   the son of the Etruscan King of Rome, rapes her, after which she is commits suicide in front of her husband, amid great unrest in Rome.   As a result, the Romans overthrew the Etruscans and the Roman Republic is declared.   An important myth in art and literature in Western Civilization, The Rape of Lucretia was painted by Botticelli and Shakespeare set it to verse.

After sitting for two-and-a-half-hours, I could certainly understand why it is rarely performed.  Although the instrumental music by Britten is superb, dramatically it is dull and the vocal music, although extremely virtuoso, has  absolutely no variation.  It is all extremely intense, and delivered at full throttle.

Theatrically speaking, the opera lacks comic relief, character development, and much of a plot.   It does not have a happy ending, but that does not mean it is a tragedy because there is no tragic hero.  Instead of a tragic hero with many positive qualities, but one tragic flaw which brings about his own downfall, there is a despicable scoundrel, devoid of any positive qualities, who does what scoundrels do, without any internal or external obstacles, to create dramatic tension or suspense.  Britten’s The Rape of Lucretia, is not a tragedy but a melodrama.

In terms of how the instrumental music was executed, the evening was fine.  A small “orchestra” with small string and woodwind sections, as well as a harp and piano played heavenly music.  Aside from the Male Chorus, a Tenor sung by Brendon Tuohy, the singing of the cast was competent but failed to move me emotionally; probably because everything was on the same intense level.

In general, I believe strongly in the mission of Vespertine. The cost of the tickets are well below the cost of tickets at the big opera houses and they employ young singers in demanding roles.  Using non-traditional spaces engenders creativity.

However, this production falls short of fulfilling the mission.  In the words of Artistic Director Dan Wallace Miller: “opera is not dead but ever living”.  He further states that “opera must reinvent itself to a new generation and a new audience”.   Unfortunately, the director himself needs to rethink his mission, for opera to be successful and reach a new generation and a new audience; it has to be theatrical, which is to say that the visual element has to be of the same high standard as the music.

There were many major flaws in the visual elements in this production.  St. Mark’s could have been an excellent space for this production with its high ceilings, and the pulpit was creatively used by the tenor-chorus; however, the director neglected to rent risers so, at best, the audience seated in the pews, could only occasionally see the heads of the actors when they were standing up, and much of the action took place on the floor.

Secondly, the costuming was confusing.   The uninspired costumes mixed styles, the officers in the army wore modern dress and the women in Rome wore quasi-Roman dress.  Costumes in any production also serve to help the audience differentiate characters.  In this production there were two officers, Tarquinius, the bad prince who rapes Collatinus’s wife.  Both actors wore the same military uniform, are of the same height, both have the same hair color and the same hair-style, making it impossible to tell them apart.  A simple wig would have sufficed to differentiate them.

Directing opera is multi-faceted; one needs to have all the skills of a theatre director, as well as the skills of a musical director.  It is imperative to respect the audience and make it understandable to those, who are there to be visually, dramatically as well as musically entertained.    Choosing The Rape of Lucretia and staging it without risers only entertained the opera addicts.

Being a moderate consumer of opera , I cannot say this opera even reached someone of the older generation.