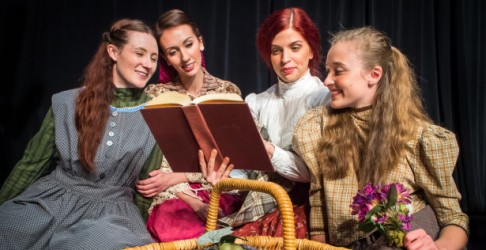 After suffering through several “gritty, raunchy, proudly & intentionally offensive” shows this fall, I was delighted to have a chance to review the “G” rated “Little Women-the Musical” at Artswest, this past weekend.  Originally performed on Broadway in 2005, it was adapted from Louisa May Alcott’s beloved 19th Century semi-autobiographical novel, by Allan Knee, with Lyrics by Mindi Dickstein and Music by Jason Howland.

Louisa May Alcott’s family belonged to the New England Transcendentalist and associated with Ralph Waldo Emerson, Henry David Thoreau and Nathaniel Hawthorne. (i.e. the leading American intellectuals of the day).  Like the heroine of Little Women, Jo March, Ms. Alcott earned her living by writing.  Ms. Alcott was very active in all of the reform movements of the 19th century:  abolition, temperance and feminism.  She also had three sisters and the Alcott family, like the March’s,  suffered through some financial hardships and various family tragedies, without letting anything destroy them.

All of the important major events of the novel are captured in this adaptation: the difficulties Jo faces as a Tom-boyish, overly-expressive female with a fierce ambition to live independently as a writer, her friendship with Laurie-the rich boy next door, the father’s absence, the death of her sister Beth, Meg’s marriage, Jo sacrificing her hair to raise money to send her mother to visit her pneumonia-ridden father, and of course Aunt March.

In an otherwise progressive family with decidedly feminist and spiritual rather than materialistic values,  Aunt March represents everything the March family dislikes-a fondness for money,  appearances, class privilege, and the stern belief that a women’s economic well-being was ensured by conforming to the ideal of the simpering submissive female.  As a result she is a good foil for Jo’s rambunctiousness, outspokenness, and independence.

In “Little Women-the Musical”, as in the novel, the main focus is Jo’s maturation as a person and writer.  While keeping her independent spirit and being true to goals set while she was an adolescent, she becomes more circumspect in what she says, less rambunctious, without becoming a manipulative female.  Paralleling her personal maturation, she also matures as a writer, and moves away from writing over-the top dramatic Gothic bodice-rippers taking place on moors in far-away places, and begins to write about what she knows and the everyday dramas in her own life.

Although there were a few slight flaws, this production was excellent,  Superb singing, excellent choreography and it was very well cast, particularly Emily Rose Frasca as Jo March.  Striking rather than traditionally beautiful, she had the energetic demeanor of Jo, plenty of humor,  and certainly conveyed the hardship of being born in 1840,  a stifling time for females.  Cindy Bradder as Marmee sang beautifully and Patricia Haines-Ainsworth as Aunt March delivered the goods as the harsh, mainly comical, but good-hearted conventional woman she was. Matthew Wright as director, kept the pace up, and the musical direction by Joshua Zimmerman, using just a few musicians,   was spot on.

It is a fairly long show, with quite a few scene changes, some of which were unnecessary, although the music covered them.  Some of the costumes needed a bit of mending and the 20th century manufactured pencil, instead of a fountain pen used to write letters and Jo’s stories stuck out like a sore thumb. (N.B.  Fountain pens were invented in 1827 and even in the 1950’s, it was considered very rude to write a letter in pencil)

However, unlike most musicals, this show has a lot of serious moral messages for children and adults, such as:  how to overcome adversity, how to deal with sibling rivalry, tenacity in pursuing one’s goals and of course not how to find true love and happiness.

Although not holiday themed, this is a perfect holiday show for the whole family.