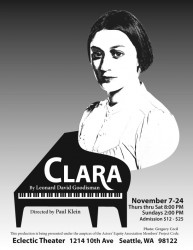 CLARA is Leonard David Goodisman’s somewhat scandalous story of German classical composer Robert Schumann (Bryan Bender), and his fiercely independent wife Clara (Allie Pratt), along with friend and rival Brahms (Jeremy Behrens) and Wagner (Eric Newman) respectively. Together, the two Schumanns navigate a life of love, trust, madness, illness, and astronomical popular success, all while a political and artistic revolution unfolds around them. The narrative unfolds with what may or may not be deliberate innuendo, as characters rehearse and compose in duets and, occasionally, trios.

Goodisman’s script takes on an impressive set of narratives. A biographical exposé; a would-be story about love, faith, psychosis, and jealousy; a great deal of philosophizing about the relevance of the past in the making of the future. It touches on many interesting subjects, yet exposition is a delicate art, and CLARA may be over-zealous in this regard. In the seemingly never-ending stream of back-and-forth on-stage arguing, the dialogue bounces like a tennis ball among the subjects of love, history, and the nature of time itself. It can be difficult to follow, and there were times in which the incoherent made way for the uncompelling, which in turn made way for the stubbornly repetitive.

Part of the Eclectic’s considerable appeal as a theater is its intimacy. Its space is conducive to a kind of production that engages the audience’s imaginations in the creation of stories, hearkening somewhat to the sets of Elizabethan drama. The set (by Margaret Tierney) for Clara does precisely what it needs to do in this regard. Yet, questions remain as to why the set needed to be painted in a slap-dash, non-uniform manner.

The actors (Bryan Bender, Eric Newman, Jeremy Behrens, Marcus Wolland, with Allie Pratt playing the titular role) are a likeable set of young, impassioned, and unpolished performers. On many occasions, they can be hard to understand because of what appears to be a directorial decision that they should swallow phrases, mutter a lot of ad-libs, and speak over one another. The performances are also static, with little visible character or emotional development to lend human form to what should be a very exciting arc. However, while they are not polished, they are nevertheless emotionally evocative, and the actors exhibit admirable understanding of and compassion for the dubious characters they portray.

It is difficult to address directing when space is tight and characters get impassioned. But there is something un-composed about CLARA. The staging of it is repetitive and gives the unnatural impression of being rehearsed… or perhaps not rehearsed enough. The story gets told, but it is told through words and not through actions. Transitions between scenes are smooth and easy, however, with classical music playing while sets are stricken and replaced. This is a very pleasant decision.

Casting actors who may not be concert pianists themselves to play great concert pianists is, I imagine, an intimidating dilemma. How does one present this? Klein placed all piano playing behind the set, where only the shadow of the player could be seen through a back-lit screen. This was effective, although it somewhat lifts the audience out of the story when they can plainly see that the movement of the actors’ hands match no part of the music they ostensibly play.

Costumes (by Holly Forbis) and lighting (Renee Cyr) are effectively executed and serve the purposes of the play without being distracting. But the sound (by Bob Blumenthal) was a distraction throughout, due to his apparent penchant for cutting off classical music segments with jarring abruptness, rather than allowing them to fade out, or end naturally.

Overall, this play was a bit exhausting. There is a thrilling jewel somewhere underneath the debris of strange period-acting, disconcerting directing, and a script that doesn’t know when to take a break.

Leonard David Goodisman’s CLARA (directed by Paul Klein) opened at the Eclectic Theater (1214 10th Ave, Seattle WA 98122) on November 7th, and it will run until the 24th, Thursday through Sunday at 8:00pm, with a matinee performance Sundays at 2:00pm.