A Light in the Darkness: A Story of Hope during the Holocaust 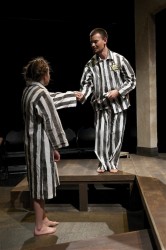 I only ever review shows at Bishop Blanchet High School about every ten years or so, but I am always amazed at how these young actors deliver outstanding performances.

A Light in the Darkness was no exception. Directed by Yale graduate, Brennan Murphy,  written by J. E. Ballntyne Jr., it was based on The Promise by Eva Geiringer Schloss and Barbara Powers.  Eva Geiringer’s story and Anne Frank’s story intersect at several points.  Both were German-speaking Jewish refugees, living in neutral Holland when the Nazis invaded in May of 1940.   Both families went into hiding and both were apprehended by the Gestapo and sent to Auschwitz.  Eva and her mother survived, her brother, Heinz, and her father did not.  After the war, Mrs. Geiringer married Otto Frank.  In addition, Heinz left behind a legacy of paintings, painted while in hiding, while Anne Frank left diaries behind.  Both the paintings and the diaries were made public after the war.

Although the script had some rough spots, the superb direction by Mr. Murphy, rendered this production riveting.  There were many outstanding performances especially by Michael Alinger as a Gestapo officer whose dramatic pauses and timing made his interrogation techniques extremely terrifying.  Matthew Charbonneau, as Dr. Josef Mengele conveyed the ghoulish quality which earned him the name “the White Angel” from the inmates.  Nico Dangla, as Heinz Geringer, the brother, delivered a monologue which brought tears to my eyes.  Many of the minor actors effectively narrated parts of the historical background to the audience

Technically,  the black box theatre served the production very well,  the set and lighting ( by Corey Erickson) was simple yet suggested the depressing nature of a world where survival was uncertain.  In addition, the sound effects (by Craig Schell) were outstanding,  with sad Kletchsmer music and evocative eerie sound effects, which at time sent shivers down my spine.  Simple period costumes by Jeannie Wood Elder were vintage 30’s and 40’s.

One of the scenes which showed off the director’s skill, was the journey to, and arrival at, Auschwitz.  Unlike Steven Spielberg, in Schindler’s List, Mr. Murphy did not have a lot of technical hardware at his disposal, but he did have creativity, which he used to superb effect.  The actors physically mimed being in an overcrowded jostling railroad box-car, through  simple sound effects of dogs barking, Germans shouting and machine gun fire,  the audience experienced the confusion and sheer terror of getting off the train at Auschwitz.

Particularly moving was the scene when Eva Geringer’s father has say good bye to Eva on the railroad platform knowing that he can no longer protect his own child. Wisely the director kept the violence to a minimum so that scenes that would have been unwatchable did not make me cringe.

For the younger generation, this play is a must see, since it chronicles every aspect of the Holocaust: fleeing persecution, hiding, deportation, death and survival in the concentration camps and hope.   For theatre students, Mr. Murphy’s direction demonstrates how creativity can transform a less than perfect play into a very moving experience.