The Walworth Farce by Enda Walsh 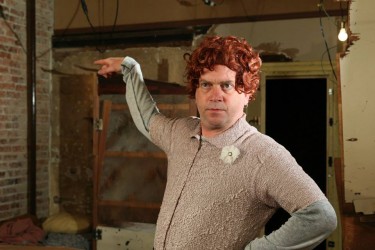 Peter Dylan O’Connor as Blake in the Walworth Farce

How Irish is my Father.

The Walworth Farce, by contemporary Irish playwright Enda Walsh, produced by New Century Theatre Company, opened at New City Theatre and was directed by the former’s artistic director, John Kazanjian.   Like many Irish plays,  it deals with fractured family relationships, exile from the old sod, poverty, greed, violence and alcoholism, all played out in one bed-sit ( more or less a studio apartment) in the South London immigrant neighborhood of Elephant and Castle.

Like many a Gothic tale, a father and two grow-up sons live in squalor and fear of the outside world.  Only one son ever goes out; to buy the exact same groceries every day from Tesco (the largest supermarket chain in the U.K.) Every day, the three act out significant events from their family’s past, particularly two very important wakes.  It is through these “scenes” that the audience learns the back-story.  Specifically the reasons why they live in isolation as well as why they are fearful of the outside world.  Until…one day…a stranger enters their hermetic environment to shake things up.

Unfortunately, this production was highly confusing for the audience, it wasn’t apparent what exactly was going on until well into the second act, and the exposition was overly long because the various scenes, which were acted out, kept making the exact same point.   All the black humor in the dialogue was played for laughs, so the humor fell flat.   The few scenes where the brothers talk quietly were in fact highly watchable and showed off the considerable talents of Darragh Kennan, as Sean, the son who wants to escape, and Peter Dylan O’Connor as Blake, the gatekeeper of the family.   The exposition did not really end until the last 15 minutes of the play.

One thing that stood out in this production was how well the actors handled the accents, particularly Peter Dylan O’Connor and Darragh Kennan, who had to play multiple characters with different voices and different accents.  Allison Strickland delivered an authentic Souff  ( as in South) London accent.

It is all very well to write plays about psychopaths, and even include some violence and anger; however a play has to be watchable.  Since the humor did not work, there was nothing to break up the monotony of all that rage hiding real human emotions.