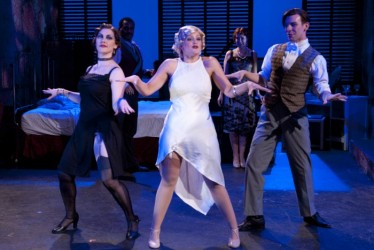 Sound Theatre Company, which has produced some excellent productions of excellent musicals has somehow managed to produce an excellent production of a very bad musical.   The Wild Party had a virtuoso cast, choreography,  musicians, set design and costuming but very little else, especially comic relief.

The play The Wild Party is very similar to the scene in the Great Gatsby, where Tom Buchanan and his mistress go to their love nest, get drunk, have a party/orgy and he hauls off and slugs her in an alcohol fueled drunken rage.  Unfortunately, it also imitates a Wagnerian opera in that it goes on and on ad infinitum with too much of the same thing.  All the songs were depressing, mostly in minor keys, everything was decadent and destructive.   What little plot there is, is buried in almost an hour and half of exposition, and the overall menacing violence is too much to sit through for three hours. Given that there was a lot of violence and spectacular dance numbers, the Wild Party demands a large stage.  Having the production in such a small space lessened the visual impact of the choreography, and being so close to the violence made me extremely uncomfortable.

On the other hand, the performances were outstanding.  Troy Wagerman, who played the male lead, Burrs, a vaudeville clown, had a commanding presence,  an impressive vocal range, with the physicality to match.   Although the material gave him little scope to express anything but masculine rage, he did convey some of the vulnerability and insecurity underneath it.  A great dancer and singer, Allison Standley eeked out some comic relief in her performance as Kate but James Sgambati and Bo Mellinger as Phil and Oscar D’Armano, were responsible for the only really funny scene in the whole play.

The script reminded me vividly that art imitates life.  In art as in life, watching anybody drinking and brawling their way to self-destruction is boring.

Thursdays are Pay What you Can as well as Industry Night Monday-Aug 19th at 7:30.