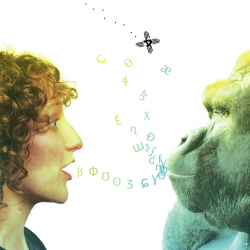 Precious little is a play on perception. A handful of women fall victim to each other’s analytical gaze in an effort to bridge the gap between their vastly different lives. There’s Brodie, an archivist and scholar of soon-to-be-extinct languages. There’s Cleva, an immigrant woman paid by Brodie to read lists of words of her dying native tongue in a recording studio. There’s the talking ape trapped in a glass enclosure and force-fed random words that, disembedded from the context of human experience, are devoid of meaning. And then there’s Brodie’s unborn baby girl whose life Brodie prematurely seeks to define as she struggles to decide whether or not she should terminate the pregnancy.

Precious Little draws a parallel between one woman’s quest to understand others with her desire to be understood. It shows the various lenses, or barriers through which we see others.

Language is a barrier. Like the ape, Brodie collects words from a language and an experience, she can not understand. The ultrasound of her baby is another lens that only complicates Brodie’s indecision. It’s only when Brodie crosses the boundary of glass between herself and the ape that their relationship evolves from superficiality to one that is communal.

The set was simple, the audience intimate. The play will make you think but ends somewhat abruptly and very soon after the climax, which I didn’t care for.  The play provided a jam-packed glimpse into Brodie’s life, with intertwining threads from several other storylines. The three actors played nine parts and brought a strong presence to every vignette, making every scene as thought-provoking as the one before. But don’t go see this play for its conclusion, it’s lacks any sense of resolution.

“Precious Little” written by Madeleine George and directed by Katherine Karaus, will be showing at the Annex Theatre Thursday thru Saturday nights at 8pm, August 2 – August 31. Buy tickets at www.annextheatre.org.