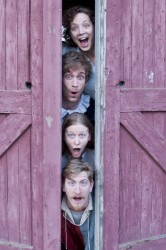 With the cobbled square of Occidental Park as their backdrop, the performers of Backyard Bard relayed the story of Viola who has disguised herself as a man in enemy territory after being displaced by a shipwreck. Viola falls in love with would-be enemy, Duke Orsino while unwittingly attracting the affections of another, all while on a journey culminating in reunion with twin brother Sebastian who believed her to be dead.

With few props and costumes they don and discard like hats, this group of four actors each perform up to four roles adding to Twelfth Night’s theme of masks and mistaken identity. The performance is fast, punchy, funny, informal and sweet. They often use the audience itself as a prop to bring the play to life, reminiscent of street side performances centuries ago. Passersby with shopping bags and baby strollers lounged on the stone steps at their feet next to the homeless that were drawn in by the show. Backyard Bard will lure you in with their chameleon-like talent and pass around their hats for some spare dollars at the end. I’d put money in again and again.

Backyard Bard will be performing “Twelfth Night” and the “Merry Wives of Windsor,” directed by Marc Moser, in Seattle area parks through August 18th. For details visit www.greenstage.org