A brave reach for “Cloud 9” 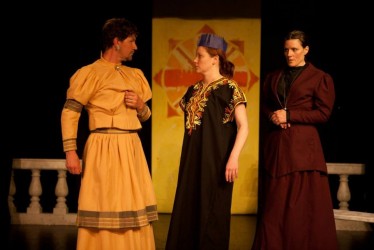 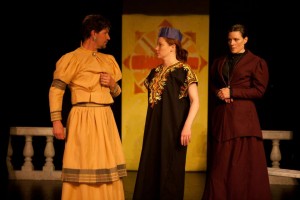 Caryl Churchill’s 1978 play “Cloud 9” is known as an audacious, racy gender-bender that pokes a finger in the eye of patriarchy and sexual repression while celebrating the freedom of the 1970’s sexual revolution. Rogue Theatrics’ brave undertaking in Seattle Center House Studio 4 fails to fully persuade that the buzz is deserved.

As a period piece of the 70’s, the play works, maybe, in setting up mirror images of the libidinous undercurrents of Victorian propriety versus the sexually liberated 70’s. Churchill’s experiment with time, moving the play forward from an indeterminate Victorian period in colonial Africa to a 1979 London park where the same characters have aged only 25 years, stretches time and place intriguingly, and opens lines of thought about cycles of time over generations, evolution of cultural mores, relativity of gender – all good stuff. However, the combination of gender reversals within and across the two acts, and actor/character switches from Act One to Act Two, require an exceedingly sharp directorial hand and uniformly deft acting skills, both somewhat lacking in this effort. 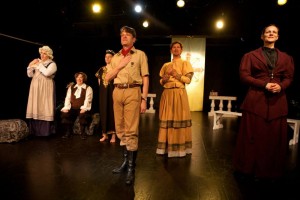 Director Shawn Main has his work cut out for him with a mixed ensemble of actors. Stand-out performances in Act One are Tom Stewart as Clive, the proper and seemingly oblivious family patriarch, and Eric Mulholland as his wife, Betty, managing the cross-dressing role in Churchill’s script with hilarious and detailed mannerisms that, like Tom Stewart’s Clive, carefully tread between caricature and verisimilitude.  Devin Rodger and Katie Woodzick (who doubles in well-contrasted roles as the housemaid and the powerful Mrs. Saunders) create sharp characters and help move the action swiftly through a long first act.

Ian McIntire and Monica Chilton in the roles of the pedophile “uncle” Harry and the young boy Edward achieve moments of emotional authenticity, but generally fall short on energy and specificity. Danielle Daggerty, a white woman playing a black male servant, maintains a steady but one-dimensional presence. By the end of the long, perplexing act, one hopes for a swift clincher of a second act. But this is not to be.

Act Two reveals weaknesses of Churchill’s script that Main and his ensemble cannot overcome. Irregularities of pacing and structure add to the confusion, with long monologues interrupting narrative flow, sections that seem to meander aimlessly (possibly an actor going completely up on her lines?) Some characters remain foggy throughout – who is this again? Things gradually coalesce as the act moves on, but fuzziness in blocking, pacing and character development leave one floundering.

The black box Studio 4 in the Seattle Center Armory is a challenging space to fill. Technical Director David Torres makes masterful use of the lighting system – whatever else one may think of the show, it is always well and imaginatively lit. Scenic Artist Erin Mar-De Wise has created a somewhat cluttered set in Act One, and an empty one in Act Two, further highlighting the show’s lack of a firm center.

The greatest strength of this somewhat flawed production is the emotional honesty and sincerity of its ensemble. Through the general cloudiness and confusion many moments of lucid emotional experience stand out. Entertaining, confusing, annoying, befuddling, the production makes a brave try at a weird puzzle of a script.