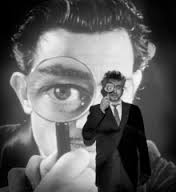 This is a highly original production created by the Pony World Theatre with Brendan Healy taking credit for writing and directing.  The show comes at the audience from a variety of angles: part art history lesson, part mystery, part love story and a whole lot of absurdist, surreal shenanigans.  Pamala Mijatov deserves special recognition serving as the props designer who I’m sure had to work with a limited budget.  Mijatov fills the stage with a crazy quilt variety of objects that quickly fly in and out of the performance area throughout the production.

Dali’s The Persistance of Memory.

The basic premise is a police investigation into how Senor Dali met his end.  Carter Rodriquez heads the case assisted by two detectives played by Chris MacDonald and Monica Finney.  These latter two have some fun playing off of the traditional set up of the odd couple working together on a case.  MacDonald is the wise mentor and Finney the wide-eyed rookie.  Throughout the first act, the investigation runs smack into the classic absurdist condition: our innate human desire for a senseless world to somehow make sense.  The play has an intriguing dynamic at work: the deeper it delves into the mystery, the more we learn about Dali’s life and art and the less we are able to make sense of the case of his actual demise.

Act two seems to throw the earnest head investigator right into the middle of Dali’s surreal imagination and art.  Rodriquez meets the ensuing chaos with a charming, quiet befuddlement.  His nuanced work nicely grounds the show, and keeps it from sliding off the tracks into mere silliness.

Although no actual Dali artwork hangs on the stage, the play successfully captures some of Dali’s surrealistic vision.  Working in and mostly out of a traditional story line, throwing in the music of Wagner, falling eggs and crazily catered meals, the play somehow produces a feeling not unlike one may get from staring at the Dali paintings displayed in the foyer.

Heather Persinger plays the earnest Art Historian with a deep love for the surrealist movement.   Sann Hall takes on the roll of a love-smitten coroner.  Ricky Coates plays a vendor continually pushing fake mustaches and other souvenirs to the cast and audience.

The Final Tribunal into the Mysterious Death of Mister Senor Salvador Dali plays through May 4 at the Theatre Off Jackson.  Abby Stein is the Production Manager; Alyssa Selbrede is the Stage Manager; lighting by Ken Cubbage; costumes by Adrienne Perry; sound design by Nathaniel Porter; choreography (the two detectives perform a charming bit of ballet) by Gabrielle Schutz. Tickets at www.brownpapertickets.com or at the door of Theatre Off Jackson at 409 7th Avenue South.