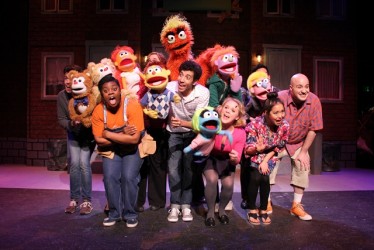 In his program note, Executive Director Jake Groshong writes that “balagan”—as in “Balagan Theatre”—is Hebrew slang for “a sort of mess or chaos that generally turns out for the best.”[1]

This could also be a clue to the happy feeling you might get when watching their season opener, the 2004 Tony Award-winning musical, Avenue Q.  Balagan’s official description of the show is a “Sesame Street-style…coming-of-age parable of Princeton, a recent college grad who moves into a shabby New York City apartment [where] he meets a host of colorful types who help him discover his purpose in life.”[2]  I second that, and might add that it’s a bit like what would happen if The Muppets met Rent, but with a lot more comedy and much, much less tragedy.

At Balagan, the wonderful chaos that is Avenue Q is handled masterfully by Director Eric Ankrim and an outstanding team of actors, musicians, and designers.   Most of the actors double as puppeteers, and on Avenue Q, unlike on PBS, we get to see the puppet and it’s handler at the same time.  Both person and puppet are so entertaining it can be hard to know where to look.  Considering this is my only gripe (is that even a gripe?), I would definitely say that this show is full of laughs and not to be missed, provided that you are ok with the subject matter:  Like any good coming of age story, coarse language and adult situations (e.g., an ode to porn and live puppet sex) pop up throughout the play.

So if this sounds like your thing, grab some money for the cash bar, head down to the Erickson Theatre, grab a PBR (oh yes, that seems to be the drink of choice on the Avenue) and get ready to be wildly entertained.