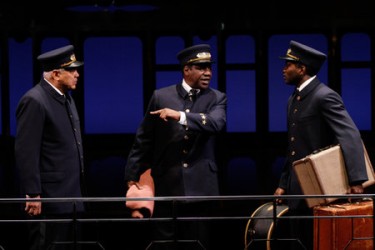 Pullman Porter Blues has its world premiere opening the Rep’s 50th season.  Seattle playwright Cheryl L. West has been developing the play for four years and presented it in three workshops.  The show’s premise is rich with potential and is definitely worth a continued polishing.  West tells the story of three generations of men working as Pullman Porters on the same train going from Chicago to New Orleans in 1937.  The storyline is entwined with thirteen traditional blues songs, wonderfully performed with a live band.

The Rep has stocked the production with a solid, talented cast.  Larry Marshall plays the grandfather, Warner Miller his son and Cleavant Derrricks his grandson.  All three are stellar actors and singers.  Marshall is particularly impressive as the hard working patriarch who has sacrificed so much, but still has the energy to break out into a joyful two-step. The men’s final number, Heekiah’s Song, is deeply touching.

E. Faye Butler’s Sister Juba really shakes the show up as a blues belting diva with a tragic back-story.  I would love to have seen her have more room to move and groove; she has major musical chops!  Indeed, a number of the songs seem a bit hemmed in by the play’s structure—let ‘em loose; I bet they could really rock the house.

West could get a lot more out of the show with a tighter, focused plot line.  A tangential relationship developed between the grandson and Lutie Duggernut, a stow-away on the train (played by Emily Chisholm) seems forced and clumsy.  The more the play sticks with the three family members and Sister Juba, the more right it feels.  Pullman’s use of African-Americans is an important story that needs to be told and the family’s conflicts have a universality that reaches out to us today.

Riccardo Hernandez is responsible for the gorgeous set that helps the plot line move down the tracks from Illinois to Mississippi. I loved what was done with the back wall projections.  Jmichael’s musical arrangements have a number of very familiar blues songs sounding new and exciting.  Costume designer Constanza Romero had Sister Juba looking really good!  The play is moving on to Washington D.C. immediately following this production.  With the right tinkering, it could chug right up the coast to New York, New York.