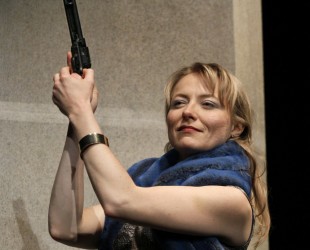 The flagship of the Intiman Theatre’s summer theatre festival is new Artistic Director Andrew Russell’s contemporary take on Henrik Ibsen’s landmark 1890 play, “Hedda Gabler”.  Following its abrupt mothballing last April, stellar productions such as this are exactly what the Intiman needs to demonstrate to a concerned public that it remains a destination for modern updates of classics plays, and daring new works.

This particular modern update arrives with a smart and contemporary translation (curse words in Ibsen, oh my!) as well as a taut running time of only two hours.  The eponymous Hedda (a resplendent Marya Sea Kaminski) returns from her honeymoon abroad with her scholar husband, Jorgen Tesman (Ryan Fields).  Theirs is a marriage of convenience on her side and awed devotion on his.  She sleepwalks through an impertinent visit from Tesman’s doting aunt (Shelle Shulkin), spars with family friend Judge Brack (Timothy McCuen Piggee), and anticipates with mixed feelings the arrival of the brilliant, but troubled, Lovborg (Michael Place).  Hedda is one of Ibsen’s most enduring characters because she is so deliciously complex.  Her behavior is censurable at best; yet, we root for her, constrained as she is by her sex and her circumstances.  The final, terrible consequence of her limited choices still has the power to shock, though her act necessarily takes on a different meaning over one-hundred-and-twenty years after its first performance.

Everything seems to have fallen into place for this production.  Jennifer Zeyl’s stylish design handily solves Ibsen’s standard box set for the Intiman’s thrust stage.  Her set possess an extraordinary depth that is simultaneously able to convey the claustrophobic cage hemming around the titular heroine and the vast, airy space high above where the play’s male characters sit from time to time, spectating her downfall.  Matt Starritt’s sound and L. B. Morse’s lights move in tandem, setting off a series of choreographed interludes that Russell, Kaminski’s Hedda, and Choreographer Olivier Weyers have spliced into Ibsen’s text.  The menacing shadows cast by Morse’s effects combine with Starritt’s ominous sounds and Weyer’s electric movements to create a tantalizing gestus of Hedda’s inner tension and her oppositional relationship to others.  Also worthy of mention are Erik Andor’s costumes, which gesture towards the turn of the previous century while remaining rooted in this century.  In this way, he avoids becoming mired in a tired, “Shakespeare-in-evening-suits” hell.  Particularly exciting are Hedda’s Christian Louboutin red-soled pumps.  Regular theatregoers have their war stories of inexplicable sets, ponderously dim lights, overwrought sound, and garish costumes.  Often, if even one of these pieces is out of joint it can cause a distraction powerful enough to damn an otherwise worthy production.  How refreshing, then, that Hedda Gabler’s technical aspects are without reproach.  We can, as Russell suggests in his director’s note, “step into the underbelly and enjoy the ride.”

And there is much to enjoy in this particular “underbelly”.  Kaminski’s Hedda is the perfect combination of calculated reserve and unhinged impulse.  Weyer’s choreography highlights Hedda’s itchy trigger finger.  Field’s Tesman is distracted and meek, outmatched by his new bride.  Piggee’s Judge is an operator, a casually menacing presence in their lives.  Place’s Lovborg preens and despairs.  He peevishly casts away his carefully constructed second chance, making himself more an object of pity than tragedy.  Unfortunately, the only weak member of an otherwise robust cast is Fawn Ledesma as Lovborg’s devoted Thea Elvstead.  She twitters and flits about the stage like a hummingbird in high-heeled boots, laboriously pacing from the water pitcher, around the settee, and back again as if repeating under her breath, “stage business, stage business, anxiety = pacing.”  Partly, this is not her fault.  She is miscast as Hedda’s girlhood classmate.  Supposed to be no more than three years younger than the protagonist, Ledesma’s Thea appears more than a decade her junior.  Such are the vagaries of repertory theatre; Ledesma is far more suited to her other role as the not-yet-fourteen-year-old Juliet in Shakespeare’s quintessent love story (playing concurrently at the Intiman until August 25th).

What is the end product when a deftly trimmed and updated script meets a sure-handed director with a fully integrated theatrical design and a near-perfect cast?  The result is as thrilling a production as I have seen in Seattle in a long time, a fitting return for the once beleaguered Intiman.  One might quibble that the final interpretive dance sequence is too long to maintain the dramatic tension of the moment and hews too closely towards the late Pina Bausch’s dance theatre, but this, of course, is only a quibble.