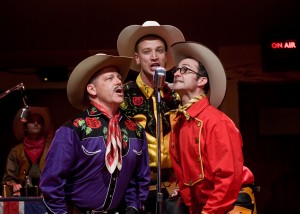 Taproot Theatre Company’s musical Chaps! is a great choice for anyone looking to be transported back to 1940’s-era musical variety entertainment. Billed by director Karen Lund as Monty-Python-meets-Roy-Rogers, this mash-up of early British comedy and early cowboy music does not disappoint.

The basic setup is this: a British radio show is set to host a Western music act to be broadcast to the troops during World War II. When the musicians don’t show up, the British radio employees are forced to do the show themselves, badly impersonating American cowboys in the process. Once this frame story has been established, the remainder of the play is basically the show that the Americans had been scheduled to put on. As a result, Chaps! comes off as more of a musical variety show itself than a play, in that there is a comic scenario but no real plot to speak of.

This being said, however, if a Western music variety show with occasional Python-esque gags (including that time-honored favorite, men in drag) sounds good to you, this show is right up your alley. The music, acting, and technical elements are superbly executed on all fronts. Being set in a radio studio, Mark Lund’s sound design had quite a lot of heavy lifting to do, and rose to the task admirably, assisted by the singers, musicians, and the radio station’s Foley artist onstage. Richard Lorig’s set was simple yet thoughtful, making good use of Taproot’s thrust stage to display all of the performers, including the onstage musical band, to the best advantage. And costume designer Sarah Burch Gordon’s designs paid more than adequate respect to the title of the play, with our good old-fashioned British chaps festooned in over-the-trouser chaps of every variety from furred to fringed to the tiny set on actor Sam Vance that was supposedly adapted from the costume of a ventriloquist’s dummy.

The acting was delivered with excellent comic timing by all, though special mention must be given to Solomon Davis, who’s performance as the silent Foley artist was particularly entertaining and whose comic dance number (reminiscent of the comic antics of Charlie Chaplin) provided the musical’s only choreography that was not of the stand-by-the-microphone-and-sway variety. And of course the music, which is the show’s main focus, was both well-played and -sung by the band and actors.

In her dramaturg’s notes, Tina Polzin makes an interesting case for the rather odd mash-up that forms the play’s basis. Drawing attention to the ebbs and flows in the popularity of Westerns over time, Polzin claims that times of perceived chaos and lawlessness, such as WWII, tend to draw attention back to the Western hero who struggles through such difficult situations. Citing such modern Westerns as True Grit, Deadwood and Firefly, Polzin draws links between the 40’s nostalgia of the show and our own time.

Prospective audience members should be warned, though, that the cowboys they will encounter in Chaps! are of the good clean variety, more like the announcers at a community squaredance than the grittier type that grace our silver screens today. But if PG-rated Western music is your cup of tea (as the Brits would say), then Chaps! is your show.

Read other reviews by rachel