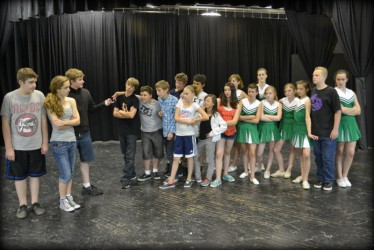 A Jew, A Catholic and a Cripple marooned at Dan Quayle Middle School in small-town Indiana….

If what you like is a serious take on the vicissitudes of adolescence, fast paced witty humor, catchy tunes, youthful energy, excellent choreography then 13, a Musical, is probably for you.

Originally produced at the Mark Taper Forum in Los Angeles in 2009, this coming of age script was adapted by Jason Robert Brown from a book by Dan Elish and Robert Horn.  Twelve and a-half-year old Evan Goldman, worries about his Bar Mitzvah after discovering, in the middle of his parents divorce, that he is being transplanted to every New Yorkers idea of hell:  a Midwestern small-town.

To combat his social disability, he hatches a plot to become an insider at his new school.  While going through various machinations to achieve his goal, he betrays his real friends, Patrice, the geeky girl next door and Archie, a kid suffering from a degenerative disease who is on crutches.  In the end though, he sees through the shallowness and nastiness of rigid adolescent social hierarchies, makes amends to his friends, gains maturity and “becomes a man” at his sparsely attended Bar Mitzvah.

One of the things that makes this musical so zingy is that the composer is also a talented librettist, there is a unity to the music and lyric which one doesn’t often find, as a result every tune rhythmically fit the lyrics and vice-versa.  There were abundant jokes of the profoundly humorous nature.  The sheer number of funny lines were too numerous to quote but one stuck in my mind:

For Jews, your Bar Mitzvah is the one day everything in your life is supposed to be happy and perfect.

See, Catholics don’t have that day. It would go against everything we believe in.

Structurally this play was near perfection.  The exposition was particularly brilliant; as the curtain rises, a Jewish rabbi in a prayer shawl intones the meaning of  Bar Mitzvah so it is perfect as the introduction to a coming of age musical.   Yann Dardonville’s performance as the rabbi was nothing short of sheer brilliance.  He was also double cast as one of the hangers-on of the Alpha male, Brett, the arbiter of who is “in” and who is “out” at the new school.  Strong performances were delivered by Jack Rogers, as Evan Goldman, the lead, as well as by his fellow outcasts:   Alia Thomaier as Patrice, the girl next door, and Harrison Gordon as Archie the kid on crutches.   Although the singing as a group was uneven, considering it was a cast of 11 to 14 year-olds, the overall quality of the singing strong.

Indeah Thomaier’s choreography was amazing with very modern elements of hip-hop, cheerleading and general adolescent energy.  The fast-paced direction by Lauren Ruhl and Shileah Corey and the live music by Michael Corey was amazing.

Although the themes of this play are the classic adolescent themes one finds in movies and musicals, 13, a Musical  was fresh and original   It is a must see for all those who want to be entertained and enlightened by a profound universal message.