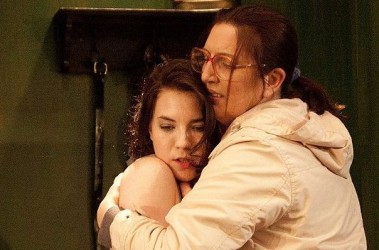 Seattle Public Theater’s current production, the 2008 play This Wide Night by Chloe Moss, is a glimpse into the lives of  two women who have recently been released from an English jail.  Though not a docudrama, Night is rooted firmly in non-fiction.  It was commissioned by former female prisoners who started their own theatre company and inspired by Moss’s conversations with inmates of Cookham Wood prison in Kent, England.  Though the play is thoroughly British,  SPT’s Artistic Director Shana Bestock hopes that is can serve as “a springboard into the stories of those closer to home in our community.”**  As an adherent of the Theatre for Social Change movement myself, I do believe that this is possible.

American audience members may be taken back a bit by the fact that not much happens in this play.  It’s two women in an apartment.  There is the official tenant, Marie (played by Emily Chisholm), and her surprise guest, her former cellmate Lorraine (played by Christina Mastin).  They go in and out, and we hear about their encounters, but that’s it for movement.  The action of the play stems from their conversations between each other and the gradual transformations we see them make within themselves.  The piece overall has a gritty yet meditative feel.  It starts off a bit slow but gets stronger as it goes along.  We do not learn much about the characters’ personal or criminal histories, as frightening or offensive as they may be.  These details do not really matter, though, because Marie and Lorraine are facing a struggle with the here and now.  They stumble through the present and are apprehensive of the future, and the future—for all of us—may be the scariest thing of all.

Perhaps most importantly, this is theatre for a good cause.  Writes SPT’s Alyson Soma, “In an effort to broaden understanding of the realities of former inmates in transition and open dialogue and promote healing, Seattle Public Theater is partnering with the IF Project and St. Vincent de Paul on a women’s clothing drive and a series of talkbacks following certain performances.”  Theatre goers can do their part by donating some of their gently used women’s clothes in exchange for a discount on the ticket price.

* “An Interview with Sheila Daniels” in Backstage at SPT.   **  Program notes.