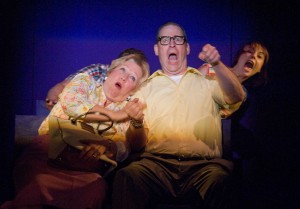 No Accounting for Laughter

Leaving Iowa, a regional premiere, written by Tim Clue and Spike Manton, opened at Taproot Theatre on Friday night.  Its subtitle could be:  Unpleasant Family Vacations in a Station Wagon Recounted.  Judging by the audiences laughter and applause,  it obviously amused some people, but it bored me.

The play moves back and forth between the present and flashbacks of road trips the family had taken when the kids were young.   Another equally unfunny road trip ensues, when Don, the son played by Ian Lindsay, decides to take his father’s ashes to its final resting place.

In addition, the play imitates the conflicts sons experience when their fathers die and they have to come to terms with the relationship.  Unfortunately, the major conflict expressed in Leaving Iowa was extremely superficial; the son missed the father’s funeral.   Since missing the father’s funeral was not due to a character flaw on the part of the son, but to a snowstorm impeding air-travel, there was not enough dramatic tension to sustain 2 hours and it seemed melodramatic and contrived.

In short, the play was trivial with repetitive subject matter; endless road trips recounting the same situation and dynamics over and over again.   The delivery of the lines was also repetitive, there was just too much high-intensity, high pitched unpleasant bickering.  Bickering can be funny, if it is witty, and delivered with vocal variation.  The director, Karen Lund, missed the most important point about humor.  Humor in order to be funny has to connect with tragedy and if you play everything for laughs, nothing is funny.  Absent were throw-away lines, sarcasm, absurdity and other comic devices.  Also absent were pleasant experiences, joy, the beauty of Iowa (I lived there for 6 years) family bonding through adversity or the restorative effects of travel.

Another reason the humor fell flat was because it was based on contempt. All you have to do to understand that the best kind of humor is not based on contempt, but on compassion, is to listen to Garrison Keillor.   During the road trips, the family interacts with various locals, of the yokel variety.  They used Southern accents for many of the characters even when the characters were Iowans.  Iowans may be hicks, although when I lived there the state had the highest literacy rate in the nation, but they are not Southern hicks, but good solid descendents of German and Scandinavian Lutherans and live in the second state to pass gay marriage.

However, these opinions only reflect the opinion of myself, my companion and a friend I chatted with during intermission.  Judging by the laughter and applause, many people will enjoy this show.