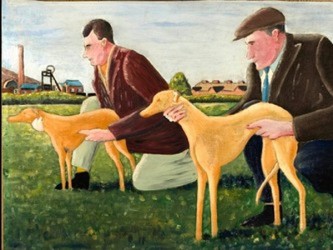 The “Pitmen Painters” opened April 26th at ACT theatre.   Written by the same author of the screenplay “Billy Elliot”, Lee Hall, it takes place in the North of England, and  revisits the subject matter of “Billy Elliot.” It recounts the real-life story of The Ashington Group, miners turned painters, who got their start at a union-sponsored Worker’s Education Association art class in 1934.     Embedded in the script is a serious discussion of the personal meaning of art in the lives of normal people. In addition, there were deliberations about various theories of art and the different schools of criticism.   The Freudians were discussed and dismissed, and there was a running gag about orthodox, vintage, Marxist aesthetics and all the other claptrap of the ‘30’s.  Fortunately, the playwright was so skillful that this serious discussion was written with subtle humor, so it never seemed pedantic or didactic.

The strength of this production was the script, adapted from a book by British art critic William Feaver.    Through out the play, the painters reveal the plight of working men in the ‘30’s: the aftershocks of WWI, the failure of the 1926 General Strike, the perilous working conditions in the coal mines,  as well as the rock-solid class solidarity and comradery, engendered by knowing that one’s survival is literally dependent on one’s “mates.” The mixed blessing of social mobility in a society where class divisions are  rigid was explored with sensitivity and compassion.

In addition, “Art Classes for Northern Folk” is a good setting to explore the North/South cultural divide.    To put it succinctly, Northerners of all classes take great pride in being immune to the “Emperor’s New Clothes”.  They are religiously committed to calling a spade and space and hyper-vigilant about “outing” the tiniest pretentions.  Straight -talking, forthright, direct and abrasive, they are very different from the passive aggressive, verbally tap-dancing middle and upper-class Southerners.  Without much education, nor television nor libraries, they encountered art for the first time in their art class.    Their reactions are refreshing, vibrant and engaging.  Since they have no preconceived notions about how they are supposed to paint, they just produce art, with brilliant results.

To contrast with the uncluttered creativity of the miners, the author cleverly depicted two characters representing different but equally negative stereotypes of “professional” artists.  Played superbly by Daniel Brockley, the painter Ben Nicholson makes an appearance as the well-born, well connected, extremely fey aesthete.  While resentfully brown-nosing his patroness, his raison d’être seems to be the Bohemian life-style, rather than creating art.   While Oliver, one of the painters, agonizes about whether to accept patronage,   Nicholson passionately pontificates about the advantages an unknown artist actually has over a “Celebrity” artist.

The art teacher, Mr. Lyons, played brilliantly by Frank Lawler, represents the well-trained but unimaginative artist, so well-schooled that he has lost all creativity.  Instead of making this character an embittered Salieri type, the author shrewdly depicted him as a modest, generous man who cared more about nurturing artists than his own vanity. The contrast between the professials and the “untrained” demonstrated that creativity exists in many unlikely places and not necessarily in likely places.

The last scene ends with optimism in 1948, the year two major goals of the Labour Party (and the Pitmen Painters) were realized: the mines were nationalized with a big improvement in working conditions, and the National Health Service was set up.  WWII is over; four of the five have survived because, although mining is no more pleasant than D-Day, it is a reserved occupation.  Also their studio, which had been requisitioned during the war, is returned to them.   Therefore, they feel that utopia, based on worker’s rights and creative enrichment was right around the corner.

Like many productions, this play was afflicted by a bit of “opening night nervousness” in the first few scenes, but that will change.  Many plays suffer from being In-the-Round, but not this one and one of the high points of the evening was seeing their stunning art work displayed on two screens.  The weak point was the working class accents.    Northern English accents, in general, and Northumberland Geordie, in particular, are very difficult and not exactly acoustically efficient.  My British companion, who lived “up North” for four years, said “they are making a brave effort with the accent, I find I can ignore it.”  My own sojourn up North made me painfully aware of the inconsistency of the accents and mispronunciation of basic words.

The acting of Charles Leggett, as George Brown, the officious union official, and Joseph P. McCarthy as Jimmy Floyd suffered as a consequence of their garbled accents.   McCarthy slipped in and out of Brooklynese as well as Americanese and it was difficult for this former resident of the North to understand them.  Although R. Hamilton Wright, as the Marxist theorist dental assistant, handled the accent well, he too had too many distracting slips and inconsistencies.    In addition, one of the jokes fell flat because they assigned the “posh” pronunciation of the word “Renaissance” to the working class blokes rather than the other way around.  Looking in an online dictionary or a pronouncing dictionary of British English would have helped.

The accents of the “posh” people-Lawlor’s Mr. Lyons and Morgan Rowe as Mrs. Southernland, the rich patroness, were virtually perfect.  Mr. Lyons could pass for British, and Mrs. Southernland managed to get in that slight upper-class variation of RP (Received Pronunciation or Standard BBC English) which is used by strong-willed upper- class women.    Daniel Brockley, double cast as the young “lad” and the fey aesthete handled both the role and the RP accent well.   R. Hamilton Wright, Christine Marie Brown as Susan Parks, the nude model, and particularly Jason Marr as Oliver Kilbourn, the most talented and  most vulnerable of the group, delivered strong believable performances of  brilliantly written scenes and monologues.

Unlike many plays where the subject is “art” I found this play extremely up-lifting since it spoke eloquently and sincerely about the inter-relationship between life and art.  And about the class struggle.