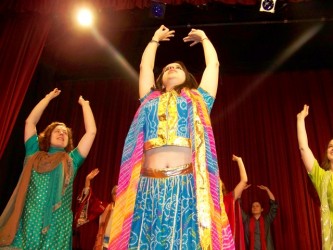 Wing-It Production’s Epic Masala:  A Hindu Musical Comedy is good theatre without a script.  Sounds contradictory, but in this case, that’s ok.

Wing-It is an improv-based theatre in Seattle’s U-District with a very funny reputation.  (Again, in this case, a good thing.)  Their current show, Epic Masala, is a colorful, high-spirited homage to Indian culture with not just one deus ex machina, but two:  Durga, a warrior mother-goddess played by Sarah Scheller, and the Lord Ganesha, a god perhaps best known to Westerners for his elephant-shaped head, played by Robert Fuentes.  Along with a narrator named Sage Narada (Nicholas Schell), the company of actors spun the story of a person’s journey—just what kind of journey is determined each night through audience suggestions.  When I attended, the show centered around a young woman named Holly with a knack for doing accents and a big geology exam to study for.  From this, the members of the ensemble (Matt Caliri, Margaret Erickson, Joe Koenen and Casey Middaugh) created the play live and on the spot, periodically returning to the audience to take further suggestions in a choose-your-own-adventure style.  In the end, Holly prevailed and passed her exam, though in true “epic” form, it took her a journey of a million miles first.  (Which again, in this case, was ok.)

The company of actors worked together very nicely, and their level of energy was very impressive.  They took cues off of one another well, moving the story along but knowing when to step back.  A good example of this was their improvised—yet near seamless—dance routines often led by Epic Dancer Shivani Seth.  Robert Scherzer’s accompanying original music is lively, and many audience members were clapping along.  In the end, just about everyone got out of their seats for a brief dance party.  From the looks of things, a good time was had by all.