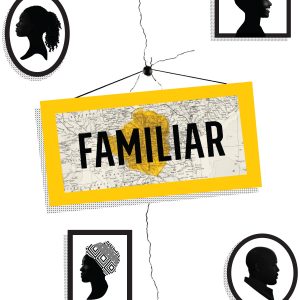 Wedding drama amongst the Chinyaramwira family takes center stage in Seattle Repertory’s production of Familiar. Written by Tony award winning writer Danai Gurira (Eclipsed), Familiar weaves together themes of belonging, immigration, cultural clashing, and family expectations. This beautiful play involves Tendi and her fiancé, Chris, preparing for their wedding (which they both wish to involve traditional Zimbabwean customs). While preparing for their wedding, chaos unfolds, secrets are revealed, and a surprise guest visits.

This play is set in the Minnesota home of Donald and Dr. Marvelous Chinyaramwira. The set design of this production was sleek and reminiscent of a two-story house. The set coincided with elements of sitcom featured in the play, and contributed to the wintry setting of the play marvelously. Gurira’s dialogue is brilliantly written, and discusses topics of tradition and cultural clashing with comedic sitcom-like lightheartedness. She was inspired to write the play in response to the underwhelming amount of stories and plays written from African perspectives.

This production featured a stellar ensemble of actors including Shá Cage (Tendi), Aishé Keita (Nysha), and Quinn Franzen (Chris). Keita’s portrayal of Tendi’s pajama-wearing humorous sister is sure to warm your soul. Her physicality and acting were phenomenal. Michael Wieser also performed fantastically. He played Chris’s country brother with a great amount of  humor that made the whole audience chuckle. Amazing acting was also seen from Anne Mwarimba (Wandachristine). Her acting was very animated, and her stage presence was such that heads could not turn away while she was acting.

While the play mostly involves events and chaos surrounding Tendi’s wedding, at the heart of the play is the Chinyaramwira family’s search for a sense of belonging. Throughout the play, layers of their complex and deeply rich family history are revealed. After layer after layer of their history is peeled, it is revealed that the family moved from war torn Zimbabwe to The United States in search of a “better life”. As the family grapples with the woes, heartbreak, and conflict surrounding challenges that come with immigration and wedding planning, the audience feels the family’s deeply powerful emotions and heartbreak.

I recommend that you go and see Seattle Repertory’s production of Familiar. The play is sure to make you laugh, and maybe even cry. Seattle Rep’s production will be closing on May 27th, so make sure to see the play soon before it closes! You can buy tickets on their website https://www.seattlerep.org/Buy/Tickets/Production/6387, or by clicking here.