The Cabiri Presents Tarhun Legend of the Lightning God 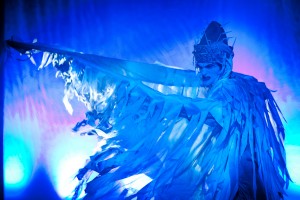 As a regular theatre goer, but new to The Cabiri Seattle’s Aerial and Dance Theatrical Troupe, I was eager to discover what was in store with the performance of Tarhun and the Lightning God.  With numerous successful productions behind them spanning over two decades, their current production is certainly no disappointment.

Playing at the Shorecrest Performing Arts Center in Shoreline, the show itself was inspired by a visit John Murphy (Founder and Director of The Cabiri), took to the fortress city of Hattusa (Eastern Turkey), where he learned a significant amount about the Gods from central Anatolia.  Both The Cabiri and the Shoreline-Lake Forest Park Arts Council captivate the audience and retrace mythological steps four thousand years ago where the escapades of Tarhun, (played by John S. Murphy), his fellow Gods and mankind battle the fierce monsters that demon Kumarbi created through aerial acrobatics, puppetry, music and dance.

An introduction of how these two arch nemeses came to be was certainly essential in understanding the tale.  It was kept suitably brief but offered a taste of excitement for what was to come.

As Kumarbi’s plan slowly unfolded with the creation of a sea monster, his connection with Aruna who was provided this task was beautifully depicted through the first of many aerial acrobatics and dance pieces.  The contrast in movement between the two displayed the intention of each character and whilst it portrayed grace, the element of manipulation by Kumarbi was plain to see.

After the war ceased, nature began to take over, and with that the God of Frost visited in what was quite frankly an exceptional scene. Costumes and effects were taken to a new level and what was particularly enjoyable about this was that while the set was somewhat simplistic, the use of lighting and special effects completely brought the choreography and its intent to life.  It was such that it allowed one’s focus to be on the cast performing on hoops, silks or dance without distraction due to multiple things happening at the same time.

As the bid to raise the Goddess of Spring from out of hiding continued, the release of yet another successful special effect was the one final hope to eliminate the God of Frost.  Was it a success?  You’ll have to book your tickets to find out!

It must be said that it was refreshing to find the intensity of the stories were injected with some humorous moments.  The last battle scene between Tarhun and the Gods, featuring some very energetic aerial acrobatics, certainly left the audience on the edge of their seats wondering if the monster Ullikummi would physically fall over due to his immense height.  However, a chuckle rippled through the spectators displaying their pleasure as they watched the antics.

Kumarbi’s plotting and scheming gave the technology its opportunity to shine using vivid colors and dark costumes to evoke feelings and atmospheres.  The contemporary choreography allowed the expression of evil and anger in a way that no other dance type could do quite as successfully.    It is both Cyrus Khambatta and Sam Alvarez (Cirque du Soliel, Odysseo) where credit is due on the choreographic front.  They bring the tales to life in such a way that the acrobatics and movement enthrall the audience; however, besides the contemporary aspect it must be said the audience was not deprived of graceful balletic interludes throughout the show and it created a much lighter atmosphere when necessary.  Both choreographers brought out the skills and talents of each and every cast member to wow the audience of what is possible.

The music that accompanied the dance was, I learned in the question and answer session that took place afterwards, specifically composed for this show.   Original Hittite spells were incorporated within the music to make it more authentic and was yet another element which really brought the show together.

This performance had me captivated me from start to finish.  It is a wonderful family show and great for children.  It’s only showing for another two nights so make sure you book your tickets, it’s not to be missed!

Please note there is strobe lighting for those sensitive to flashing lights.

Read other reviews by Eleanor Symes