Principal Principle Staged Reading Gets an A 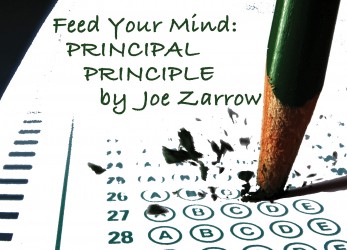 Is our public educational system grinding itself into the ground?

This is just one of the questions Joe Zarrow explores in his 2014 play, Principal Principle. The Mirror Stage held two readings of the play over the weekend with time for audience comments and questions after each. If you are unfamiliar with the idea of a staged reading here is what you can expect: the actors will read their roles from scripts in their hand or on the table. There will be no lighting or sound effects and also no props or stage set. Someone, usually the director, will read the stage directions and also read for minor characters. Director Suzanne Cohen helped her cast of five women read this play with great vigor and emotion, nonetheless.

With this stripped down version of theater, I feel much more focused on the play’s themes. In Principal Principle (PP) there are many, all clamoring, all representative of some point of view in our pluralistic culture. The five roles are stock characters in school-based dramas: the new enthusiastic teacher (Brenda Joyner as Kay Josephs); the weary veteran due to retire soon (Joanne Klein as Denise Corey), the stable department lead caught between the district and her colleagues (Shaunyce Omar as Ola Lawrence); the experienced teacher who volunteers to mentor the newbie on the ways to really help the students in spite of the drift in district policies that make that harder and harder (Elena Flory-Barnes as Shelley Woods), and the principal who wants to run the school as imagined through sport and business metaphors and cliches (Meenakshi Rishi as Ms. Banerjee).

Most of the action happens in the cluttered staff room of the English Department in a Chicago high school. The district is under pressure to raise scores and has purchased a standard curriculum for teaching English Literature. The teachers argue over the merits of this approach, the diagrams used, the texts used, and the education their students are receiving vs an education they truly can connect to and need for the lives they inhabit. The prize dangled for the department that raises their scores the most is a new Epson copier.

Which raises the question about the state of the current copier in the department. Sometimes it works, sometimes not. Don’t ever think of using the duplex function (making copies directly on both sides of a sheet), instead one must copy on one side, reinsert the paper, and then copy on the back side. But the end of the play several of the teachers are spending $30 a day at Kinkos making their own copies.

One of the actors pointed out during the discussion that her daughter said the copier is a stand-in for the whole system—sometimes you can coax what you want out of it, sometimes you have to provide your own private solutions.

In PP, the following works or authors were used by at least one teacher in their classroom. (Please circle the letter of the one that provoked the most controversy): (A) The Great Gatsby   (B) Harriet Jacobs  (C) Huck Finn. The answer, is (C) Huck Finn, of course. Is it racist or is it not? Is it appropriate  that the standard curriculum uses it so it has to be taught at the predominately black school where this play is set? Does teaching this text, even liking it, make a young, white, female teacher racist? Who gets to make any of  these decisions?

And, by skimping on the teaching of Huck Finn and squeezing in other texts one needs to, ahem, translate the students scores on your modified instruction to match the standardized scores, what’s the harm? The students need to know their black authors, taught by a black teacher, too, don’t they? Is it really cheating if you make the scores roughly equivalent?

Zarrow and this reading show up the irony that a system that has conflated correct answers on a multiple-choice exam with learning can’t even pose for itself clear questions with clear—correct—answers.

Principal Principle by Joe Zarrow, directed by Suzanne Cohen. A Mirror Stage play reading. Feb 7 and Feb 8 at the Ethnic Cultural Theatre on the UW Campus.