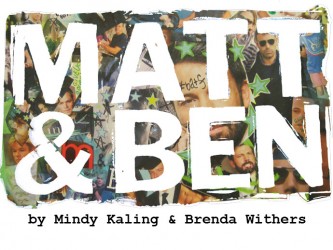 Matt & Ben opened the 6th season for Stageright on Friday February 13. With the classic guy’s guys being played by women, this play’s bromance has a hysterical twist.

A story about how Ben Affleck and Matt Damon supposedly got their start with Good Will Hunting, Sarah Nottingham (Matt) and Lauren Johnson (Ben) bring these characters to life. With slight Boston accents and wicked sense of humors, these ladies show how two people navigate a friendship.

Johnson, with a Red Socks hat on backwards, Homer Simpson slippers, and a cut up t-shirt plays the testosterone filled Ben. Her portrayal of Affleck is exactly how I would picture the cocky boy, who hasn’t yet turned into a man. Nottingham’s Ben exudes the fidgety boy Damon comes across as.

When a script falls from the sky the two and their relationship are put to the test. The theme of opportunity knocking is played out in an all too real with way dreamlike visits from Gwyneth Paltrow and J.D. Salinger to convince the friends that they need to take a chance and be in control of their own destiny. With an underlying theme of collaboration and compromise Matt and Ben muddle their way through the decisions to make, with lots of snacking, beer drinking, and one epic fist fight.

The script for Good Will Hunting is dropped in their lap by God, played by Kiki Abba, who is also Paltrow, Salinger, and Mrs. Damon, a bit reminiscent of Dogma, where Alanis Morrissette plays God, a tall, thin, wavy haired woman in robes.

A funny twist on a coming of age story, the characters are full of puns and insults- resulting in a hysterical play. The set and seating feels more like a living room than a stage, allowing you to be a part of the play. With Matt and Ben frequently talking to the audience you can’t help but laugh at the crass humor, sexual innuendos, and insults.