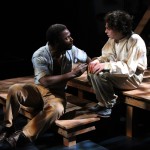 Book-It Repertory Theatre brings another work of North American classic literature to the stage with, Adventures of Huckleberry Finn: Uncensored. Under the leadership of co-conceivers Jane Jones and Judd Parkin, Huck Finn opened on Saturday night at the Center Theatre at the Armory for a five-week run.  With Ms. Jones directing Parkin’s adaptation of Mark Twain’s novel, many kinds of story-telling are at work as the ensemble of ten musicians and actors work at a breakneck speed to evoke the story of two of history’s most legendary runaways.

In Ms. Jones’ program note, she writes that decision to “uncensor” the work is the team’s response to “the recent sanitation of the novel” as an “attempt to re-write history.”  The primary controversy centered about the replacement of the word “nigger” with the word “slave” in recent editions of the novel.  Editors felt the change would allow public schools to bring Huck back into a politically “corrected” curriculum.  Many rallied to defense of the original work, arguing that to change the novel was to whitewash (perhaps a useful metaphor) history, and to attempt to erase the language, actions and stories that are part of this country’s complex past.  The word “nigger” appears in the book more than 200 times; Book-It audiences will hear it plenty during the long evening.

The story-telling is par for Book-It’s regular course. Stunning physical invention, use of  few props, tightly-directed ensemble play, and ingenious moments in Andrea Bryn Bush and Andrew D. Smith’s scenic and lighting design all fill the arena with evocative staging of Huck and Jim’s flight. The creation of the infamous raft floating down the Mississippi, is sheer stage magic, and when actors climb ropes and sway gently in the blue dappled light, you might be transported to the great river’s movement and not incidentally, to the bond growing between Huck and Jim. The actors are a ferocious bunch of gifted players, and they transform before our eyes with just a little help from the essentialized costumes of K. D. Schill, and the pace of Jones’ sometimes frenetic staging. The old-timey band, under the direction of  is tucked behind the rafters of rough wood and often emerge to help people a scene. At the center of the action are Geoffery Simmons and Christopher Morson, playing Jim and Huck respectively.  Perfectly cast, Simmons and Morson command the nearly circular stage with their marvelous voices and deeply felt performances. The dialects are difficult, and though at times I had that wincing feeling that some of the accents were too broad, too twangy, Simmons and Morson mostly inhabit the voices of Jim and Huck in such a way that it rarely felt pushed. I could listen to the story.

In Parkin’s notes he writes that the book is “wrongly characterized” as a work for children, rightly reminding us that the main characters are “the abused son of a dangerous alcoholic and a desperate, runaway slave.” But this production rarely finds a tone deep enough to be anything but accessible for the youngest of children. Despite the production’s un-censoring of a single, heavily loaded epithet, the adaptation edits, and censors, if you will, by rarely tackling the darker, or more poetic aspects of Twain’s memory-writing.  I admired the work of Russell Hodgkinson, who was able to bring us the fury and ugliness of Huck’s father Pap without relying on any cartoonish style, exaggerated dialect, or excessively broad style of play.  Pap, along with the vagabond who would be King, and his other characters were deeply rooted, never sacrificing dimension for the sake of theatricality.

A full length book, when churned through the techniques of Book-It’s play-making craft, transforms into a two or three hour play.  Every word simply cannot be included. In this case, Book-It’s production has a positive, can-do kind of storytelling that almost feels like people will break into song.  And then they do. Huck and Jim escape again on their raft, to yet another test of their skills to survive.  And then they do. Adventures of Huckleberry Finn: Uncensored tells a part of the story of race in America, but a small part.  We will learn about a lot about the white people that surround Huckleberry’s adventure, but Jim cannot possible stand-in for an entire race all on his own, and all through Samuel Clemens’ pen.  Excellent dramaturgy and a host of community-based discussions along with theatre work at Franklin High School accompany the efforts of Book It to support audiences’ discussion of Huckleberry, Jim, and hopefully, their own adventures.