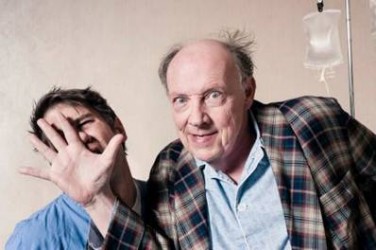 ASSISTED LIVING opened at ACT Theatre this Friday.  It seems to follow the fashion these days, dictated by simple demographics, of writing plays and movies about baby-boomers retiring.

Although the minor stages at ACT Theatre produce some of the most interesting, innovative and profound shows to be found in Seattle (or anywhere) , many of the main-stage productions seem to be little more than cash-cows appealing to the least common denominator.

A fundamental rule about playing comedy was ignored by the actors and director in this production:  play the tragic seriousness and the comedy will effortlessly be expressed.  Play it for laughs and the comedy falls flat.  This production failed to deliver the comedy partly by the delivery of the lines and partly because the script was very weak.  Humor where the elderly is concerned exists because of their tragic circumstances.  This script glossed over the existential angst of old age and dying, and chose a very trite plot device to keep the action going, so I was bored and annoyed the whole time, unlike most of the audience who seemed to laugh at the appropriate parts.  Also lacking was comic timing,  the dialogue dragged a lot.

Essentially, ASSISTED LIVING is a slice of life about a nursing home after medicare has been abolished and Dick Cheney is president.  Unfortunately, what could have been directed as a stylized surreal piece, was directed as a more or less realistic piece which made it very didactic.  There is a Nurse Ratchet character, named Nurse Claudia played by Julie Briskman.  Four of the inmates ( two are former actors) and an orderly, stage a play but Big Nurse tries to prevent the audience from coming, which did not motivate the action very much, so there were no real stakes at risk.

Recently, I reviewed a play called JALOPIES by Mark Chenovick, a one-person play about the real travails of the elderly under a menacing evil, corrupt health-care system.  Put together on a shoe-string, JALOPIES delivered the tragedy, immense comedy, humanity and compassion, which was sorely lacking in ACT’s expensive production.

One very good thing about the play was the set-it looked authentically institutional.   Many people in the audience liked this play, but for me, I prefer the low-budget meatier version of assisted living for the elderly as portrayed in JALOPIES.