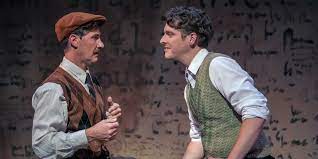 If the production of the award winning Nonsense and Beauty is indeed Theatre 22’s swan song, they are leaving us a delightful and thoughtful parting gift.  Upon hearing the opening lines, written by playwright Scott C. Sickles, who was in the opening night’s audience, we know we are in good hands.  We meet British author E.M. Forster and his best friend J.R. Ackerley attending a boating match between Cambridge and Oxford back in April, 1930.  The two are quite enchanted watching the hard working young male boaters rocket down the river.  The dialogue is witty and concise and deftly delivered.  Before long, Forster will meet the love of his life, Bob Buckingham, a young British policeman.  The nearly overwhelming romantic difficulties facing Forster and his much younger partner make for the basic conflict of the play.  Upon this simple premise, Sickles constructs a moving story exploring a theme so important to Forster in his novels: in our crazy spinning world, nothing is more vital than making emotional and intellectual connections with our fellow man.

Director Corey McDaniel maintains a brisk pace throughout the two-act work, while still providing moments in which the five member cast can explore powerful personal truths amid their complicated relationships.  The play, based on a true story, is divided into novel-like chapters, each given a title and introduced by one of of the players and each moving us further into the relationship between Forster and Buckingham.  Forster, played by an excellent Eric Mulholland, has already achieved a good deal of fame as a popular British novelist.  He has recently moved on from living with his mother, Lily Forster, portrayed by a spirited Marty Mukhalian, who seems to be having a ball delivering some spot on social zingers.  She hopes beyond hope that her Edward will eventually find a good woman to share his life.  Forster, his friends call him Morgan, knows that this will never be the case and yet is all too aware of the overwhelming emotional and practical obstacles placed before him in desiring a loving male partner.  Early on he tells Bob, (a dynamic Russell Matthews) that he hopes only for an “an occasional warm kiss…and to die in your arms.”  Such simple dreams must confront the harsh realities of early 20th century England, where a homosexual relationship is considered unlawfully deviant.

Bob will go on to court and eventually marry May (Jennifer Ewing) a nurse he meets in London.  The question concerning whether Bob genuinely loves May or is simply employing her as a socially acceptable mask is never succinctly answered.  The couple go on to form deep friendships with both Forster and Ackerley (Hisam Goueli).  The torturous love triangle enmeshing Bob, May and Forster is complicated by the respect and deep feelings the three have for each other.  Forster’s esteem for the institution of the family provides for particular anguish when Bob and May go on to have a child that will become Forster’s godson.

Sickles makes it abundantly clear that there are no easy answers here, but as the plot line moves all the way through to June, 1970, we learn a great deal about the vagaries of love, and beauty and yes, nonsense that provide the meat that makes up the lives of these smart and caring people.  Thanks to the skills of this immensely talented cast and crew, we end up greatly caring about  their outcomes as well.

Nonsense and Beauty will play through October 1 at the Seattle Public Theater on Green Lake; 7312 W. Green Lake Drive.  For more information about the show and tickets go to https://www.theatre22.org