At Seattle Rep Where We Belong Demands Recognition 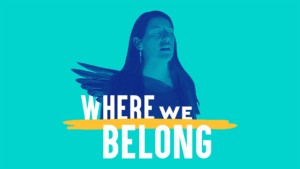 On September 21st at the Leo K. Theater at the Seattle Rep, Madeline Sayet flew across the stage in, Where We Belong. Written by Sayet and directed by Mei Ann Teo, The Wooly Mammoth Theatre Company production spent 90 minutes dissecting history and examining the gory entrails of colonialism from a surviving Mohegan perspective.

The set was more intriguing than most one-person shows. Before Sayet set foot smiling on stage the audience was forced to ponder the set and what it could mean or how everything would be utilized. Instead of a traditional backdrop, the back of the stage was adorned with a reflective aluminum looking wall. Along downstage right and left were glass jars filled with clear and cloudy water. The floor had an intricate design of what appeared to be dirt shaped in intentional lines and mounds. The ceiling was covered in twinkle lights and long office lights hooked up to a pulley system. The minimalistic set afforded Sayet the ability to traverse borders and rooms. The moving color changing lights unexpectedly danced in the backdrop.

This savvy set design made Sayet’s show feel artsy and more intimate. The audience was allowed to follow Sayet as she struggled with the ideas of home and Shakespeare during her endeavor to get her PhD. We were forced to feel the punches of colonialism just as Sayet was forced to feel the punches of making sure her Mohegan culture and language survives. Her initial thesis was that Shakespeare was anti colonialism, though living in his home country Sayet found that argument harder and harder to prove until eventually dropping out of her PhD program to return to her homeland.

Though one person shows can often feel preachy or drag on Sayet’s story does not. It’s a poignant conversation mixed with moments of lightness. At times the white guilt radiating from the mostly white audience felt palpable and from the outside it may seem that Sayet was telling her story to the wrong audience. However, upon really receiving the message of her story it becomes evident that this story needs to be shared with white ears because the people that have been colonized already understand the devastating effects of colonization, but those that were the colonizers hear history too often told from the “winners’” perspective.

If you are ready for a difficult yet necessary conversation on Mohegan culture and how it’s attempting to reclaim its roots from Europeans then you should absolutely see, Where We Belong.

Where We Belong, written by Madeline Sayet and produced by The Wooly Mammoth Theatre Company and playing at Leo K. Theater at the Seattle Repertory Theatre 155 Mercer St, Seattle, WA 98109 (206) 443-2222 . Running through October 9th. For tickets: https://www.seattlerep.org/plays/202223-season/where-we-belong/performances