Much Ado about Nothing-Shakes up Shakespeare in Seattle 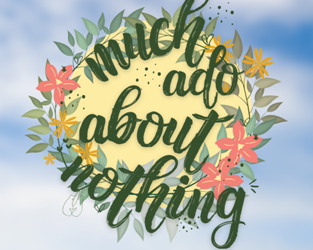 Much Ado about Nothing was really SOMETHING

In spite of having been given free tickets to the RSC every Monday night for a year, I can safely say that Seattle Shakespeare’s production of Much Ado about Nothing was the best Shakespeare show I have ever seen. This was due to director Allison Narver’s skillful creativity as it was incredibly enjoyable while at the same time honoring the text.

One of Shakespeare’s great comedies, in modern terms, Much Ado about Nothing is a classic Rom-com. Two couples woo, experience difficulties, which are resolved with a happy ending. But, of course, the wooing process, in the respective couples, is different, the “wooing” employed by the couple in the main plot, Beatrice and Benedict, is the inverse of the “wooing” of the couple in the subplot, Hero and Claudio. Third parties use deception to interfere in these relationship, destructive deception for Hero and Claudio but comical constructive deception to bring Beatrice and Benedict together.

Along the way, Shakespeare illustrates “a truth universally acknowledged” that Jane Austen also hit upon: that often two people who intensely verbally spar are, in fact, attracted to each other. Beatrice and Benedict do not take much nudging to acknowledge feelings for each other, Kate and Petrucchio do fall in love, Elizabeth Bennett and Mr. Darcy do end up marrying.

As the play opens, a group of soldiers re-visit Leonato’s court for R& R. Beatrice, a high spirited woman of great wit, has had a history of verbal combat with Benedict, a confirmed bachelor. As soon as they arrive, his best mate, Claudio, falls hormonally in love with Beatrice’s cousin, who conveniently has a nice dowry, so a “perfect” match is made.

As the friends and relatives gather to celebrate the one engagement, they joke about how amusing the verbal spats would be if Beatrice and Benedict were to fall in love. While laughing uproariously at the unlikelihood of that ever happening, they hatch a plot, using deception, to make it happen. Using a simple middle school trick of informing each person separately that the other is dying of love for them, it works, resulting in the former enemies falling in love. 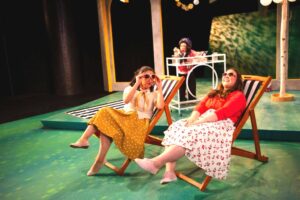 Meanwhile, deception is used maliciously for political purposes to thwart Hero and Claudio’s marriage by falsely accusing her of infidelity. Benedict’s loyalty is tested, but in the end the villains who perpetrated the false accusation are exposed, and the couples marry.

Although there are those who erroneously believe that Shakespeare should always be staged in period dress, fortunately, director Narver was not one of them, she chose to set the show in a 1950’s Caribbean resort, using the fashions, the music and the dances to make this a highly entertaining and interesting show.

Also, the extremely competent cast made the language their own, milking ever syllable for humor and nuance. From the very first few lines in the first scene the audience was engaged and laughing. The addition of a number of dance numbers, again in 1950’s style, choreographed by Crystal Dawn Munkers to original music by José “Juicy Gonzales, served the production well.

Standouts in the cast were of course Beatrice by Jonelle Jordan, who not only handled the language superbly, with impeccable comic timing, but also had excellent physicality to match. As her sparring partner, M.L. Roberts as Benedict, was her equal, and was at his best when he slipped into a slight Southern drawl at times. 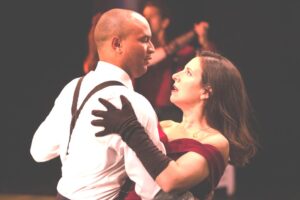 Costumes by Natalie Shih were very authentic 1950’s and very flattering to the characters. Before the show, the audience feasted their eyes on an incredibly gorgeous set, designed by Justin Johnson, which not only was beautiful, but also allowed numerous scenes to be staged without scene changes. The drinks table, complete with ‘50’s martini glasses, designed by prop designer Robin Macartney added to the affluent leisurely atmosphere, while being completely beautiful and authentic. Shakespeare is about language, but the sheer visual beauty of the dancing, costumes, set and lighting complemented the beauty of the language. 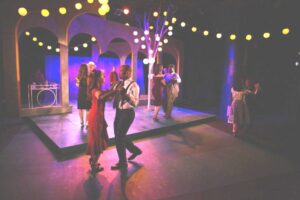 But a production like this does not come together without the oversight of a highly competent director, who made creative but intelligent choices. It is with great pleasure that I recommend Allison Narver’s Much Ado about Nothing at Seattle Shakespeare. (N.B. If you have friends who profess to hate Shakespeare, take them to this show, so that they will change their mind. I guarantee it.)