OR-Spy or Playwright that is the Question 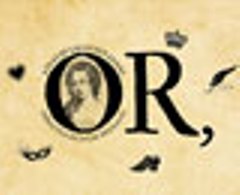 Escape from Spying-Become a Playwright

Theater 22’s newest production, OR by Liz Duffy Adams, opened at Seattle Public Theater’s space (the old Bathhouse) in Greenlake Park this past weekend. It recounts one night in the life of the first woman writer, Alphra Behn, who actually gained substantial recognition as a playwright. ( during the Restoration period in England that is to say, after Oliver Cromwell died and the monarchy under Charles II, was “restored”) A former spy and poet, she turned to playwriting because it was more lucrative, so she wrote not just to express herself but also to have a profession, with which to gain financial independence.

The play opens when Alphra is in debtor’s prison after her sojourn as a spy. Disguised as a mysterious visitor, King Charles II, visits her, pays her debts and sets her up in relatively luxurious lodgings. Hoping to avoid the fate of becoming a kept woman, she attempts to gain full employment by taking a commission to write a play; in only one night. But…she is constantly interrupted when various visitors drop in. First, a young cross dressing Nell Gwynne (the famous Restoration actress) shows up and the two women engage in a short sexual encounter. Then her former male colleague from the spy trade, who was also her lover, turns up with a bizarre story about a plot to kill Charles II. Needless to say, the disguised King appears as well, looking to cash in on his investment. In addition, she gets visits from her prospective employer, and the maid. They all keep popping in and out and Alphra, as in a bedroom farce, tries to keep them all from meeting, so there is a lot of hiding in wardrobes, in bedrooms, frantic rushing about, and general mayhem.

The strength of the production was Corey McDaniel’s numerous performances as 1) King Charles II using an impeccable English accent with a superb chest resonant voice 2) William Scot, the disreputable, fairly inebriated ex-spy who is trying to both blackmail Behn and seduce her and 3) the widow of the Theater Manager who had a 15 minute non-stop monologue. Each character was differentiated, by different accents and voices and the quick costume changes were impressive. Also impressive were his comic timing and wit. It would be nice to see McDaniel on stage more. Alanah Pascual put in good performances as Nell Gwynne and various servants; she had a good command of Cockney and was very funny.

The weakness of the play was the script itself, which was confused, had a very long wordy exposition, and tried to didactically “message” the audience rather than focus on a real conflict. The message and its medium, i.e. the language used to convey the message, was sheer 21st century. The plot was frivolous in that there did not seem to be anything terribly emotionally important at stake.

Another glaring weakness was the poor performance of the lead playing Aphra Behn, Hazel Rose Gibson. Like many American actors, she concentrated on pronouncing individual words with a British pronunciation rather than acquiring an English intonation pattern and vocal placement to have the correct resonance and sound British. Somehow, she never seemed to connect with her character, the script or the other actors on stage.