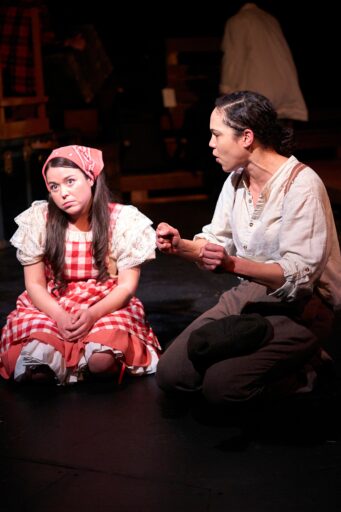 A goofy and sped-through version of Shakespeare’s comedy As You Like It (AYLI) is on stage at Seattle Shakespeare. Director Lamar Legend focuses on the crushes of the banished Rosalind (Ayo Tushinde)and lovesick Orlando (Miguel Castellano), her friend Celia (Rachel Guyer-Mafune) and Orlando’s entitled brother Oliver (Arjun Pande), and the love bugs of the countryside’s sheep-herding class (Kathy Hsieh as Phebe and Bob Williams as Silvius).  In this production, physical comedy is the ruling principle. The profound themes of restriction and freedom, authoritarianism and personal agency, treachery between brothers, sisterhood between girls, and the conflict between a life at court (or corporation,  castle, urban luxury, whatever the choice) and a life near and listening to nature (or urban jungle, for that matter), are left under-explored or cut altogether. The production is certainly fun to watch, but as is often with editing a great play, hard to follow.

Legend and Seattle Shakes had the long overdue genius to pound the drums for artists of color in the Seattle Shakespeare community, and the two productions under the banner “Drum and Colours” convened a great group of diverse folks. This is a powerful gathering of the tribes, and it was clear that the company of actors are inspired by playing/working together. But the lack of dramaturgy in the editing, the cutting of key characters, and the breakneck speed of scenes regardless of their distinct tones made this production a blur of muffled verse. The setting of wooden pallets and endless rearranging of a dozen chairs (Scenic design by Parmida Ziaei) did nothing to evoke the stifling order of court, or create the wilds of the Forest of Arden. There seems to be little at stake for Rosalind in being banished from court and disguising herself as a man, nor for Celia in disobeying her father and going with her.

Rosalind is Shakespeare’s most brilliant female character. She nimbly juggles her changing circumstances, her sudden and confusing lust, and the consequences of her own cleverness. When meeting Orlando in Arden, she is in disguise and using the name “Ganymede,” who in Greek mythology is the god of homosexual desire. (S)he determines to teach Orlando how to woo a woman, and pretends to be one in their game. So Tushinde is playing a woman, disguised as a man, now “acting” like a girl in order to teach the man with whom her female self is in love how to woo. Whew! There’s a tangle. Tushinde’s tempo is ferocious, almost as though Legend gave her the sole responsibility of “picking up the pace” and getting through the intermission-less two hours as fast as possible. We cannot track the wooing game going on between her and Orlando, nor the homoerotic themes that can and should arise as two “boys” woo each other. I had hoped that this BiPoC company of artists might pay attention to the great possibilities in this play, already rife with gender tension, to use some gender-queer’d casting so that we had lovers of all identities at the end of the play. Opportunity missed.

Legend’s blocking has the actors hyper-energetically moving all over the place, whether in an intimate two-handed scene or shifting furniture. Legend allows some of his actors to mug upstage of action and mime conversations alongside of critical exposition. Maybe good for a laugh here and there—but the focus becomes frayed. Distractions happen on a greater scale with the constant movement of chairs during key scenes. I recognize they were trying to construct the “forest” out of crates and sticks, but the idea didn’t pay off.

The Drum and Colours team cut the key role of Touchstone, aptly named as he is Rosalind’s fool and loyal friend. Cut any of Shakespeare’s fools at your peril—you cut the protagonist’s mirror and conscience. Legend then sacrifices the love play of Touchstone and the shepardess Audrey, also cut, destabilizing the intricate balance of the four couples in this play. Touchstone and Audrey lust unabashedly, without tension, disguise, resistance or confusion—in distinct and purposeful contrast to the other couples in the play. Also cut was Jacques, Shakespeare’s infamous melancholic who accompanies Duke Senior in the forest. His speech which begins, “All the world’s a stage and all the men and women merely players…” is distributed between 3 other actors, removing any sense of character from the lines. The text is clear enough, but played for laughs with physical antics. Jacques is left alone, unloved, and un-loveable at the end of the play. His melancholy, and his view of life as a cycle that begins and ends in helplessness, is meant to be played against the happy endings of the lovers, who in fact, helped themselves in finding their way. We lose that theme completely.

There were many moments during Legend’s production where I felt his take on the play landed with artistic clarity and elegance. When the banished Duke Senior provides comfort and sustenance to the humiliated and wounded young Orlando, the elder teaches him of the magic, beauty and freedom of a life next to nature. Both Latinx actors, for one brief, shining moment, fall into the Spanish language. In that instant, the audience had to lean forward, listen, and for those who didn’t speak Spanish, wonder. That is exactly what must happen to Orlando in that moment, he learns that the magic of the Forest of Arden, though bewildering, may have a great deal to offer him. Spanish never returns, a sadly under-explored direction. Later, when Celia is danced and dipped to an impossible depth by Oliver for a passionate kiss, I felt the physicality of Legend’s production zoom into focus, as the exaggerated gesture was the perfect expression of the characters in that moment. But these and other moments were not enough to hold this production. Legend spent the first ten solid minutes of this production letting his actors improvise that they were a group of traveling players, getting ready to put on a show—a well-worn trope that is in no way indicated by the text. But still, a great idea. The prologue included an original welcome written in verse with a resounding “Places!” being called by the luminescent Nike Imoru, playing the company stage manager. It was a delight to watch.  But Legend never returns to the conceit to close the parenthesis he opened—we never see the “players” again, we never see the “stage manager” return. The ending of this production was its weakest moment. We could not see the lovers together, we could not see resolution between brothers, or appreciate the reunion of Rosalind with her father. Actors just started bowing, and so signaled the play was done.

One of the beautiful things about Shakespeare for actors, directors, and producers is that the work is entirely in the public domain. One can do anything they want with Shakespeare’s texts, language, plots, characters, tropes, and styles. There have been brilliant re-imaginings and deconstructions of these plays—only consider projects like Peter Brook’s solo Hamlet with Adrian Lester (a British actor with Jamaican parents), or Punchdrunk’s immersive and terrifying version of Macbeth (staged in the McKittrick hotel in NYC), which included fewer than 100 lines of the play. These and other experiments reconceive these masterworks and yet still impart their characters and stories. I would encourage the spirit of Drum and Colours to go forward, to add a dramaturg to the team and to be bolder in their imaginings of Shakespeare for artists of color.  They are many ways to interpret the plays of Shakespeare. But you gotta know what you are starting with before you start to take it apart.